This article is using {{Card template}}.
See Help:Style guide/Card for how to edit this kind of article.
Edit this article
Seaforium Bomber
48753 • BOT_511
Regular 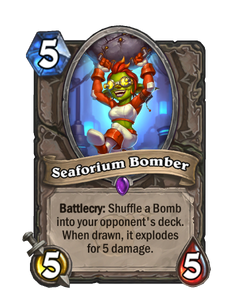 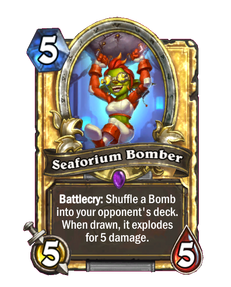 Dimensions: Full • 330 x 410px
Battlecry: Shuffle a Bomb into your opponent's deck. When drawn, it explodes for 5 damage.
Flavor text 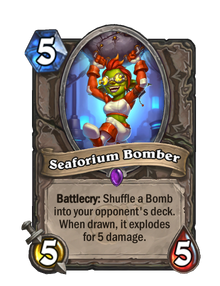 Seaforium Bomber is an epic neutral minion card, from The Boomsday Project set. 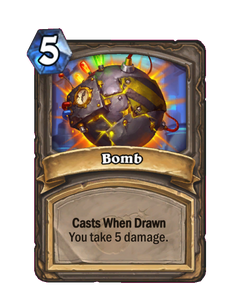 This is a neutral version of Iron Juggernaut, with a lower cost and a weaker effect. Combining this with cards like Zola the Gorgon, Youthful Brewmaster, Augmented Elekk, or Shudderwock, would allow the player to repeatedly shuffle Bombs to the opponent's deck. It's one of the few cards that can power up Blastmaster Boom's Battlecry.

Normally, the Bomb would explode in the opponent's turn, so it can bypass Ice Block. Cards like Research Project or Coldlight Oracle can be played after shuffling Bombs to make the explosions earlier, but need to be careful not to mill them.

Seaforium is a type of volatile explosive compound in the Warcraft universe that can come in a powder or a malleable putty. It is most often portrayed as being used in bombs and other such high explosive devices, but has also been used in low explosives, most notably as a powerful (and very dangerous) rocket fuel. According to Ashlan Stonesmirk, "Seaforium is harmless enough, but once it's wet it could blow Ironforge out of the mountain."