This article is using {{Card template}}.
See Help:Style guide/Card for how to edit this kind of article.
Edit this article
Sea Reaver
2723 • AT_130
Regular 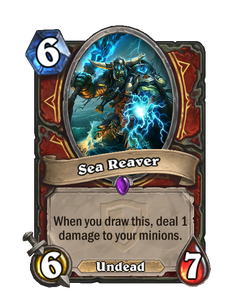 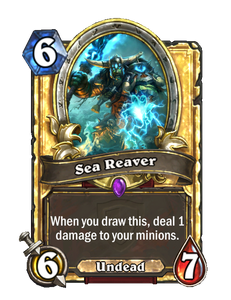 A little better than Sea Minus Reaver. 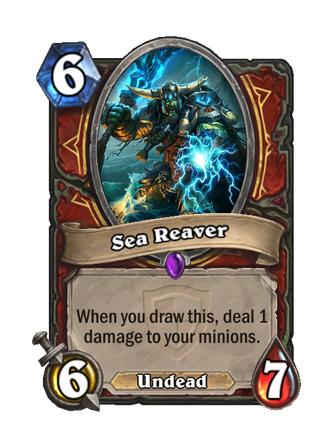 Sea Reaver is an epic warrior minion card, from the Grand Tournament set.

Boulderfist Ogre for warriors that help many of the warrior cards that need his minions damaged to use, Such as

Frothing Berserker, ect). Best used in a deck that works off this theme as you cannot control when the effect goes off.

The kvaldir, or tuk-hariq (meaning "walkers of the fog" or "sons of the mist" in the tuskarr language), also known as sea vrykul, are fearsome seafaring vrykul raiders who roam the seas raiding ships and coastal settlements.

Long ago, tribes of vrykul were scattered across ancient northern Kalimdor. One tribe in particular struggled against a terrible malaise that ravaged its people.

Combating this affliction, this "curse of flesh," all but consumed the tribe. After exhausting all natural attempts, the tribe sought the aid of its priestesses. These women plumbed the world of spirits for answers, but they found only a malevolent entity lying in wait.

Their ritual went horribly wrong, as the entity further corrupted those that sought freedom from their curse. These eternally vengeful beings would later be called the kvaldir.

The art for this card specifically depicts Drottinn Hrothgar.

Drottinn Hrothgar is a level 79 kvaldir raider who has claimed Hrothgar's Landing from the local tuskarr.

Sea Reaver was voiced by Dave Mallow, who also voiced