This article is using {{Card template}}.
See Help:Style guide/Card for how to edit this kind of article.
Edit this article
Scrapyard Colossus
56819 • BT_155
Regular 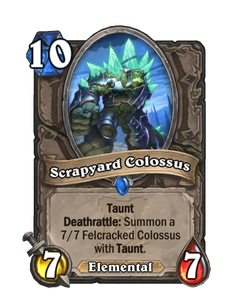 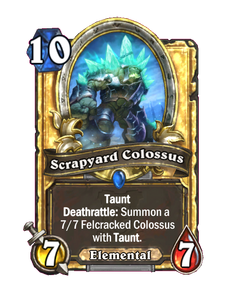 Heap on heapin' on. 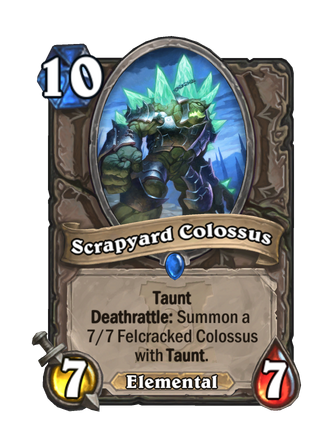 Scrapyard Colossus is a rare neutral minion card, from the Ashes of Outland set. 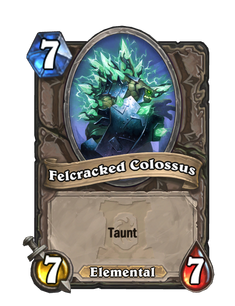 A sticky Taunt that typically requires two removal spells. This makes it especially effective when cheated out by cards like

This is a strong minion for Ramp Druid and Embiggen Druid, which can accelerate their mana to quickly summon this minion.

For Shaman, It is very good into cards like

Ancestral Spirit are able to not only reproduce it again but also being able to create another 7/7 from its deathrattle building additional shield for your hero.

Grave Rune allows to produce two copies allowing to make three additional 7/7 taunts in total from 3 of its Deathrattles.

Because of its Deathrattle, it is a popular minion to be resurrected from

N'Zoth, the Corruptor or other resurrection spells or taking advantage of resummons from neutral minions like

A colossus (plural colossi), also known as a crystal giant, and a earthen giant, is a type of

Mountain Giant. Their flesh is stony and giant crystals stud their shoulders, back, and skull. They can be found in Outland and Azeroth.

In Hellfire Peninsula, Pathaleon the Calculator dropped a red crystal from the sky for his master

Kael'thas Sunstrider. The crystal's evil emanations started summoning the colossi led by King Goliathon and driving them insane. Colossi could also be found in Netherstorm and other locations of the shattered world of Outland. The Illidari tried to negotiate an alliance with those in Shadowmoon Valley, led by Behemothon, to no success.