This article is using {{Card template}}.
See Help:Style guide/Card for how to edit this kind of article.
Edit this article
Scourgelord Garrosh
43423 • ICC_834
Regular 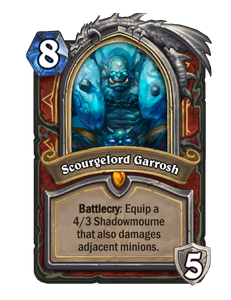 "You dare to challenge me? Come! Draw your last breath - and then, you are mine." 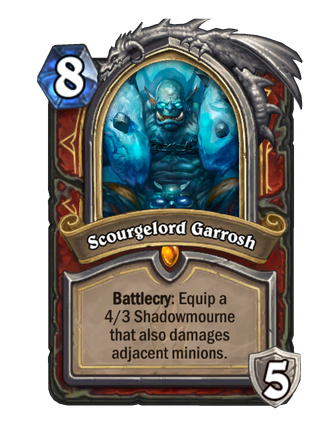 Scourgelord Garrosh is a legendary warrior hero card, from the Knights of the Frozen Throne set.

Like all other death knight hero cards, Scourgelord Garrosh is 1 of the 9 possible hero card rewards for completing the prologue of the Icecrown singleplayer adventure. 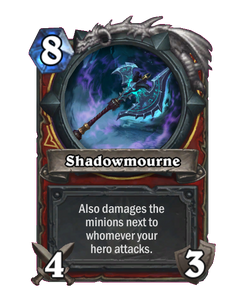 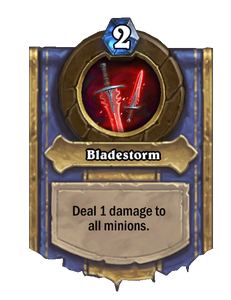 Scourgelord Garrosh works best in decks that benefit from damaging friendly minions. Cards such as

Acolyte of Pain have fantastic synergy with Garrosh's Hero Power, Bladestorm. In addition, being able to deal 1 damage to all enemy minions can provide solid tempo, as it can remove multiple cheap minions for 2 Mana without having to use a card.

Garrosh's weapon, Shadowmourne, is also an excellent tool for clearing the board. As it damages simultaneous minions, it's often best to strike a minion with low Attack surrounded by high Attack, low Health minions on both sides; this will deal considerable damage to all three minions while your Hero takes very little damage himself. While the weapon can be used to attack the enemy Hero, it's most advised to use it against enemy minions to make the most of its powerful effect.

In addition, activating Scourgelord Garrosh will provide you with 5 armor; if you're extremely low on health, this can be an emergency fix to stay in the game while you work to retake the board. On the other hand, bear in mind that you will lose your

Armor Up! hero power, which may make you vulnerable to chip damage in extended matches.

Scourgelord Garrosh is the death knight version of

In the web comic Freedom, a

Pompous Thespian tells a tale of how

Varian Wrynn and his son Anduin. Along the way, she encountered the undead Garrosh, who had come to Stormwind seeking recruits for his army and claimed to know who had taken the two men Valeera was searching for. The Pompous Thespian's story is interrupted by the audience, who are confused by Garrosh's role in the story, but the storyteller replies that the orc had fallen under the influence of

The Lich King. The thespian continues his tale with Garrosh offering Valeera a pair of blades, claiming that they would enhance her abilities as well as grant her new ones. Valeera asked about who had taken Varian and Anduin, and Garrosh explained that the Lich King had recently raised a death knight who had escaped into the wilds and began raising his own army of undead, threatening not only the Frozen Throne, but the world at large. Garrosh concluded by stating that the fates of Valeera's human friends hung in the balance, and that only he and the rogue stood between the shadow and his goal of absolute chaos. Suddenly, Garrosh and Valeera found themselves facing the Shadowreaper, as Garrosh called it, and its army of undead. Valeera leapt into the fray with the blades Garrosh had given her, but each attack turned her more and more into a death knight. Garrosh and Valeera fought their way to the insane shadow at the undead army's heart, but in response, the creature sent forth its ascendant to transform one of the undead soldiers into a hulking monstrosity. Valeera fully embraced her darkness and gleefully slew the ascendant. However, as she prepared to attack the shadow, it told her "I know you will not harm me. You love me." Valeera turned on Garrosh as she realized that he had tried to make her kill the only person left in the world she cared about. Garrosh replied that Valeera had been a slave all her life, even after she escaped the gladiator pits. The Scourgelord admitted that he was the one who took Varian and Anduin, and that the Lich King had sensed both Valeera's potential and her weakness from afar. Garrosh continued that Valeera's devotion to the Wrynns was just another form of slavery, and that if she truly wanted to be free, she had to kill the Shadowreaper. Valeera turned around and stabbed Anduin in the chest, but to the audience's annoyance, the Pompous Thespian refuses to tell the end of the story, stating that the point of the tale was to ponder Valeera's choice and the meaning of "freedom".