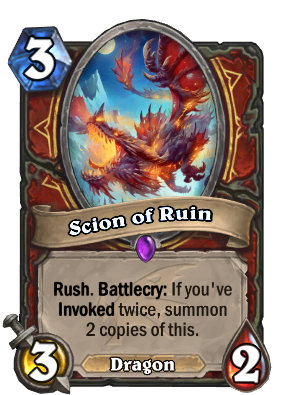 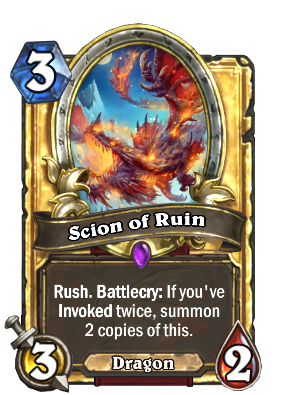 Scion of Ruin is an epic warrior minion card, from the Descent of Dragons set.

Scion of Ruin can be obtained through Descent of Dragons card packs, or through crafting.

This minion is one of the top reasons to use a Galakrond Warrior deck, providing a huge amount of value for a relatively small amount of mana. On its own, the Scion of Ruin is very mediocre, effectively being a Restless Mummy without Reborn. After being Invoked twice, an easy feat in the proper deck, it produces a total 9/6 worth of stats with Rush, letting you easily demolish aggressive boards or threaten the opponent's health total. This card's Rush keyword also makes it very easy to tutor with Town Crier and Countess Ashmore, but if you don't need them urgently, saving them to be drawn by Galakrond's Battlecry can also be devastating.

While already powerful, this dragon's true strength is in being able to create even more value. Using Dragon Breeder, Sathrovarr, and Barista Lynchen, a patient player can create a whooping 25 Scions, enough to control the board against even the strongest defensive or control decks. War Master Voone is also a great card for spitting out even more Scions, especially after playing Barista Lynchen.

The Scion of Ruin appears to be a berserk black drake that is unique to Hearthstone. The scion's name and monstrous appearance, including what seems to be fire erupting from several parts of its body, seem to indicate that it is a child of Deathwing that particularly takes after its father.