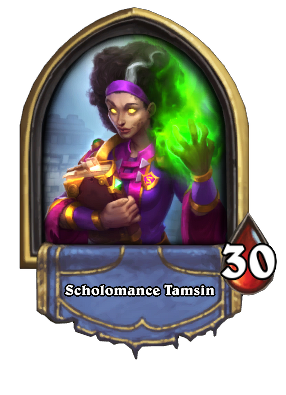 For other representations of Tamsin, see Tamsin Roame (disambiguation).

Scholomance Tamsin is an alternate hero for the

This is one of Tamsin's appearances as a Judicious Junior in Scholomance Academy raised as an undead after the school was invaded by the Scourge.

Scholomance Tamsin can be obtained by purchasing the Tavern Pass and reaching level 15 in the United in Stormwind' Rewards Track.

Once unlocked and selected for use, Scholomance Tamsin replaces Gul'dan whenever the player uses a Warlock deck, as well as:

When viewed in the Collection, Scholomance Tamsin has the following flavor text: