For other appearances of Jaina, see Jaina Proudmoore (disambiguation). 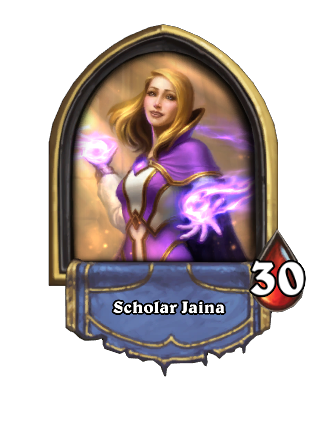 Scholar Jaina is a hero skin for the mage class.

Jaina Proudmoore's appearance during her very early days, specificially when she was still an apprentice of

Born three years prior to the First War, Jaina Proudmoore was the middle child of Lord Admiral Daelin Proudmoore, ruler of Kul Tiras, and his wife Katherine. Jaina was loved by her family and, from an early age, was filled with the joy of learning and the duties of a young lady, despite House Proudmoore's military background. As a child, she had a governess and several tutors and propriety demanded that she be followed by an escort of her lady-in-waiting and a guard or two. She had a habit of hiding whenever she was frightened or upset, but her mother Katherine would always find her. Jaina had always been fond of reading; the library of Proudmoore Keep was her favorite spot growing up as her mother bemusedly noted, "surrounding [herself] with musty old tomes." At a young age, she was enamored with tales of the Guardian Aegwynn. As a child, Jaina witnessed a tidesage bless a Kul Tiran ship at least once, something she would not see again until many years later.

When her magical talent was discovered after the Second War, Katherine had to fight Daelin to allow Jaina to be taught at Dalaran, though their daughter didn't know of this. On her way to Dalaran, Jaina—who was then 11 years old—briefly stayed as a guest in Lordaeron's Capital City, where she became close friends with Princess Calia Menethil. One day during a prayer session in the Menethil family chapel, Jaina for the first time met the 12-year-old

Prince Arthas, heir to the throne of Lordaeron, who thought Jaina looked like someone who was well accustomed to riding and hiking, spent a great deal of time outdoors, and would not mind having a snowball pelted in her face or going for a swim on a hot day. Arthas volunteered to escort Jaina to Dalaran along with her guards and servants. One night during the journey, the prince convinced her to sneak off with him and look at one of the internment camps where the Alliance kept orcs imprisoned—the first real adventure they had together. Unlike Arthas, Jaina found herself feeling compassion for the captive orcs, even though the Horde had killed her older brother Derek during the Second War.

Jaina spent the following years studying as a member of the Kirin Tor in Dalaran. 6 years after her arrival to the city, she badgered the Kirin Tor's leader

Archmage Antonidas into accepting her as an apprentice, eventually becoming one of the few female wizards in direct service to Dalaran. She came to be known as a star pupil who excelled at magical research and investigation, and Antonidas believed she had the potential to become the greatest sorceress in human history. The high elf prince

Kael'thas Sunstrider was enamored with Jaina, but she did not return his feelings and remained focused on her studies as she wanted to advance on her own merits and not simply because an elven prince enjoyed her company. 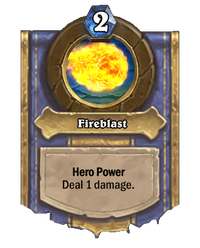 Once unlocked and selected for use, Scholar Jaina replaces Jaina Proudmoore whenever the player uses a Mage deck, as well as:

When viewed in the Collection, Scholar Jaina has the following flavor text:

Behind every great archmage is an impeccable education at a strange and highly secretive organization. Obtained by purchasing the Scholar Jaina Bundle.