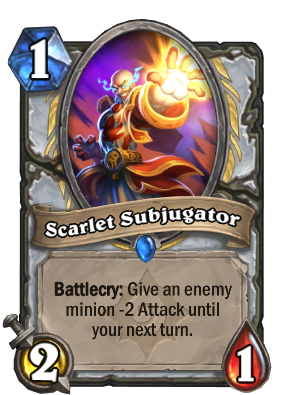 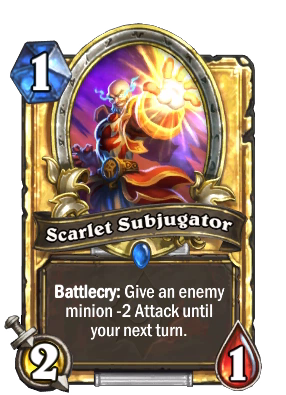 Battlecry: Give an enemy minion -2 Attack until your next turn.
Flavor text

At the Scarlet Monastery, he learned the sacred art of kicking people when they're up.

Scarlet Subjugator is a rare priest minion card, inducted into the Legacy set, formerly from the Classic set.

Scarlet Subjugator can be obtained through crafting only.

Used for trading, Scarlet Subjugator can essentially be seen as a +2 Health on a friendly minion for one turn, allowing you to maintain board advantage. The "Health bonus" increases with each minion used to trade, making Scarlet Subjugator perfect for taking down one large minion with multiple small ones. This also puts a 2/1 on to the field to threaten more damage or force them to waste their hero power.

The other main use for this minion is manipulating an enemy's attack for cards like Shadow Word: Pain, Shadow Madness, and Cabal Shadow Priest. This will allow you to use Pain or Shadow Madness on a minion with as high as 5 Attack, or permanently steal a minion with 3 or 4.

If you reduce a minion's Attack to 0 then use Crazed Alchemist or Topsy Turvy on it, you will destroy the target since its Health becomes 0.

In Wild, Scarlet Subjugator competes with Shrinkmeister, which costs more but comes with a stronger body.