This article is using {{Card template}}.
See Help:Style guide/Card for how to edit this kind of article.
Edit this article
Scarlet Purifier
2069 • GVG_101
Regular 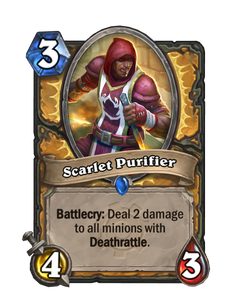 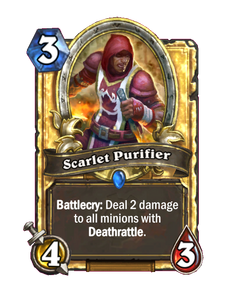 The Scarlet Crusade is doing market research to find out if the "Mauve Crusade" would be better received. 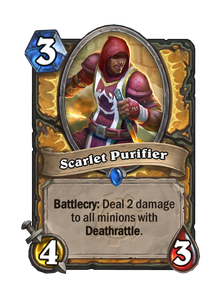 Scarlet Purifier is a rare paladin minion card, from the Goblins vs Gnomes set.

This card's effect will hit your own Deathrattle minions too. This is generally a drawback to playing this card, but it can be very useful in combination with cards like Nerubian Egg and Runic Egg, to activate their Deathrattles. While this card's Battlecry only affects Deathrattle minions, by destroying a minion such as Explosive Sheep, Unstable Ghoul or Boom Bot, it can be used to deal damage to other minions as well. Care must be considered when using the Purifier against enemy minions, for it could prove a hindrance rather than a benefit.

Scarlet Purifier has an interesting combination with Desperate Stand. You can use the Deathrattle from the spell to atract the damage from Purifier's Battlecry. This can be used to finish the minion and then using Reinforce or Rush minions to destroy the revived version.

His effect can be used alongside Baron Rivendare and Hakkar, the Soulflayer to launch 2 blood cards for your opponent.

Summon
Stratholme will be purged!

"The light condemns all who harbor evil. Now you will die!"

Scarlet Purifiers are members of the Scarlet Crusade, found in the Scarlet Monastery. Spell-casting DPS types, they use Purifying Flames and Flamestrike to decimate any who stand against them.

"Good. Channel the flames, feel them course through you."
"Learn this spell well for it will burn the taint from all those who oppose us."

Interrogator James Vishas was a level 31 elite human found in the Graveyard wing of the Scarlet Monastery.

James Vishas was the Scarlet Crusade's lead interrogator at the Scarlet Monastery. He enjoyed torturing any captured undead and took great pride in his work. Vishas was known for his unrelenting sadism, cruel expertise, and high pitched voice.

Interrogator Vishas tortured Vorrel Sengutz for weeks. Vishas took Sengutz's wedding ring and gave it to his own wife, Nancy Vishas. Nancy lived with Grandpa Vishas, who is presumably James' father, although it is not mentioned, at a cottage on the eastern coast of Lordamere Lake in the Alterac Mountains.