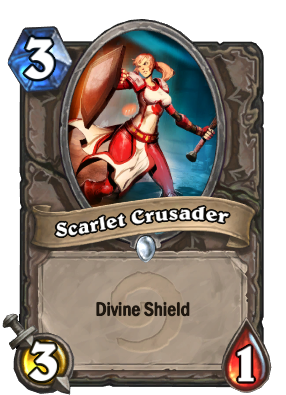 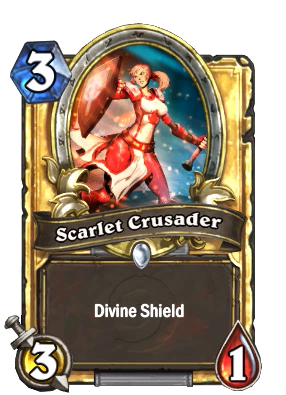 Never wash your whites with a Scarlet Crusader.

Scarlet Crusader is a common neutral minion card, inducted into the Legacy set, formerly from the Classic set. 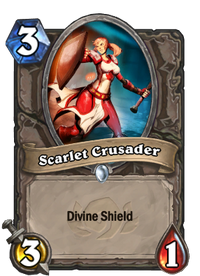 Scarlet Crusader can be obtained through Classic card packs, or through crafting.

Divine Shield gives the Scarlet Crusader a free extra hit. While it may seem that a 3/1 for 3 Mana is a bit expensive, she can take out fairly large threats and still stay around for another swing. In certain situations however, even with the Divine Shield her 1 Health is a big drawback, as e.g. an Unstable Ghoul that costs 2 Mana is going to trade up with the Scarlet Crusader.

A good choice for an arena deck looking to deal out damage quickly. Keep in mind that Silence will remove the shield, so if you are able to buff her, you may be able to pull one of your opponent's Silences out onto her and save your more important minions at a later point in the game.

Summon
For the Crusade!

"The Scarlet Crusade shall smite the wicked and drive evil from these lands!" - Scarlet Purifier