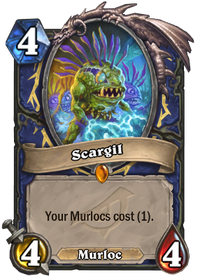 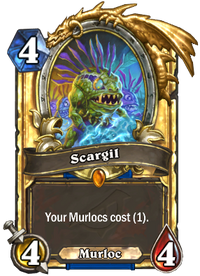 Wanna know how he got those scars? So does he.

Scargil is a legendary shaman minion card, from the Rise of Shadows set.

Scargil can be obtained through Rise of Shadows card packs, or through crafting.

Scargil is an effective card in Murloc Shaman decks for dumping your Murlocs out of your hand very quickly. While Murlocs are generally cheap, Scargil lets you combo higher cost Murlocs together to maximize synergy effects. Murloc that greatly benefit from the cost reduction include Underbelly Angler to gain a bunch of Murlocs and Ghost Light Angler for summoning as many 1-mana 2/2s as you can afford. As a 4/4 it's also a decent tempo play, with a chance to survive to the next turn.

Scargil is a level 21 rare mob murloc found on the Western Strand in Hillsbrad Foothills. It is on a 5-8 hour respawn timer.