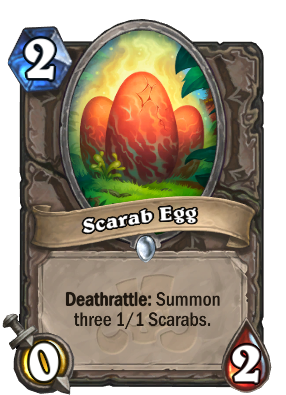 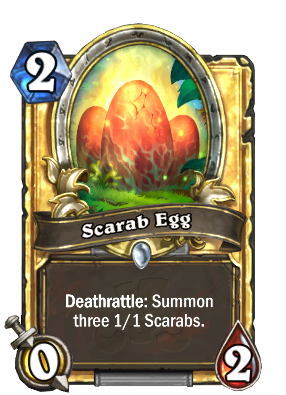 They say you can’t make an omelet without AHHH THEY’RE EATING MY FACE!

Scarab Egg is a common neutral minion card, from the Rastakhan's Rumble set.

Scarab Egg can be obtained through Rastakhan's Rumble card packs, or through crafting. 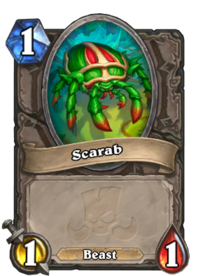 This minion is comparable to Snake Trap in Hunter, in that it is a delayed summoning of 3 1/1 Beasts for 2 mana. In a different way, it is comparable to Nerubian Egg and Devilsaur Egg, as an egg requiring scrambling for above-average stats for mana. As such, it shares many of the advantages and disadvantages to both categories of cards.

The summoning of 3 small minions, rather than one large minion, makes this card work particularly well in a Token deck, which can take advantage of the multiple bodies through effects such as Power of the Wild, Flametongue Totem and Knife Juggler. It also provides some insurance against AoE abilities, as this card's power comes from after it is destroyed.

The Beast tag is important to Hunters, and to a lesser extent Druids, as it opens up additional options using cards such as Scavenging Hyena, Spirit of the Lynx and Mark of Y'Shaarj.