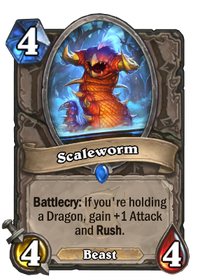 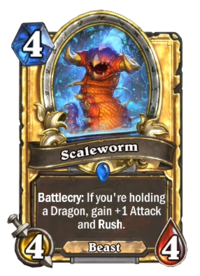 Battlecry: If you're holding a Dragon, gain +1 Attack and Rush.

A popular local alternative to bananas.

Scaleworm is a rare neutral minion card, from the The Witchwood set.

Scaleworm can be obtained through The Witchwood card packs, or through crafting.

Scaleworm is a well-statted minion with Dragon synergy that also provides board control with Rush. As a 5/4, it can kill most minions with comparable mana while also having a decent amount of health to survive trading. It's very effective at breaking through Tar Creeper.

Jormungar are enormous worms that can be encountered in Northrend in World of Warcraft: Wrath of the Lich King. They have muscular, flattened bodies with rows of crystalline spines along either flank.

According to the frost vrykul Astrid Bjornrittar the Jormungar are the children of the titanic watcher Loken. Further legends tell of the nerubians' using the jormungar as creatures of labor, forcing them to carve massive tunnels through Northrend's subterranean ice and lay the groundwork for the nerubians' ancient civilization. With the fall of the nerubian empire, swarms of rogue jormungar ran amok, drilling through the region's permafrost, attacking surface dwellers, and devouring everything in their path. The jormungar no longer appear to serve the nerubians, undead or otherwise, in any capacity. However, Scourged Burrowers are similar creatures with a similar function for them.