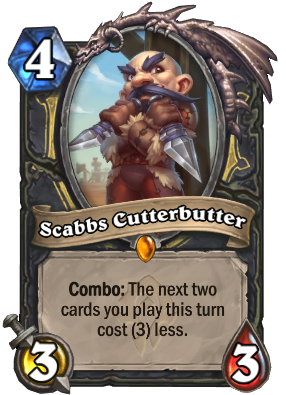 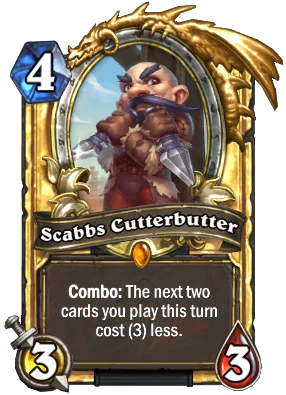 Combo: The next two cards you play this turn cost (3) less.
Flavor text

"Never lie, steal, cheat, or drink. Unless you're compelled to, that is…" —Scabbs Cutterbutter

Scabbs Cutterbutter is a legendary rogue minion card, from the Forged in the Barrens set.

Scabbs Cutterbutter can be obtained through Forged in the Barrens card packs, through crafting, or as an Arena reward.

In a pinch, Scabbs can help increase the consistency and tempo of Rogue decks if you can trigger his Combo requirement. Being able to play two additional cards can synergize with Miracle Rogue cards such as Field Contact and Prize Plunderer, or allow for additional key cards to be played such as Swindle or Cloak of Shadows. It's worth noting that most Standard decks as of Forged in the Barrens tend to favor Kazakus, Golem Shaper as their 4-drop, however.

If Tenwu of the Red Smoke is played after Scabbs and returns a minion to your hand, Scabbs' effect will be overwritten and the minion returned will cost 1 mana instead of 0.

Scabbs Cutterbutter is unique to Hearthstone. He is one of the ten mercenaries introduced in Forged in the Barrens.

No one wants to eat from a chef named Scabbs, but SI:7 Agent Cutterbutter was once the most sought-after cook in the Eastern Kingdoms. His unmatched talent with a knife drew the attention of Matthias Shaw and the other spies of Stormwind Intelligence.

Scabbs joined SI:7 during a difficult time for Stormwind. King Varian has gone missing. Calls for help from Redridge and Darkshire go unanswered. A glowing object explodes in the sky, raining shards of light across the land. A concerned member of the royal court has hired several mercenaries to search for these shards of light.

SI:7 wants to know more. Agent Cutterbutter is dispatched to the Barrens to investigate…[1]