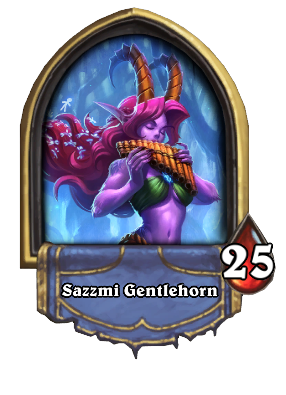 This satyr has a tendency to attract more than just rats.

Sazzmi Gentlehorn is a boss that can be encountered during the Monster Hunt. 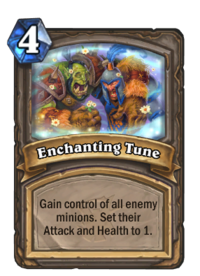 Use your cannons to deal with her 1/1 minions.

Because of Sazzmi's hero power it is not beneficial to use Houndmaster Shaw's hero power to summon a 1/1 Bloodhound without immediately trading the minion if the Companionship passive was not taken. When Sazzmi uses her hero power to put these on her side of the board they retain their natural rush state and can be used to clear anything she didn't steal. Even when the Companionship passive is taken, playing Rush or Charge minions can be risky because of cards like Aldor Peacekeeper. Minions with powerful Deathrattles are similarly dangerous. It could be said that Toki is the best hero to challenge Sazzmi due to being primarily spell/removal focused.

Don't play your minions in one turn. Keep your board small so she don't steal too many minions.

Keep your deal damage minions in your hand. Play them only when she plays her minions.

Hagatha The Witch
Stay a while and listen. Stay forever.

Sazzmi Gentlehorn
Come with me, little ones.
Follow the sounds of my tune.
I'll take care of you! Trust me.
One, two, three! Follow me!
This way! Come along now.

Sazzmi Gentlehorn
Can't we all just get along?
Do you find my tune alluring?
Take a seat by me! I won't bite.

Aren't you just adorable?
I could just eat you up!
You're almost as charming as me! Well...

Sazzmi Gentlehorn
These woods have a music all their own.

Sazzmi Gentlehorn is original to Hearthstone. Her art is identical to the Witchwood Piper. She appears to be a satyr flute-player in which her enticing tune has been enchanted by the Witchwood, probably serving Hagatha to keep it. If you come across her, she probably isn't going to let you leave until you listen to her play her song, resulting in you being lost to it and the Witchwood.