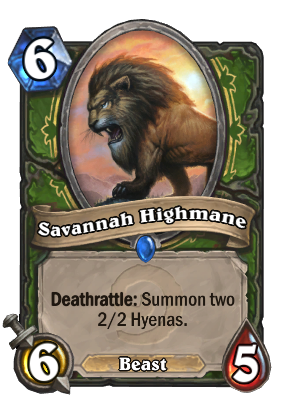 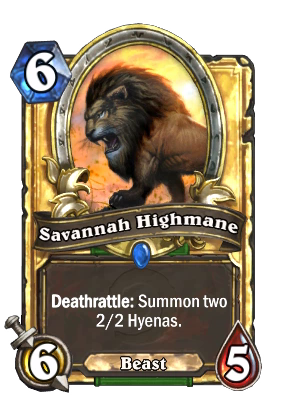 Savannah Highmane is a rare hunter minion card, inducted into the Legacy set, formerly from the Classic set. 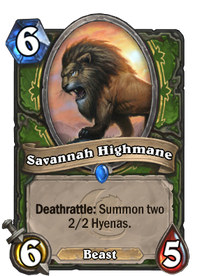 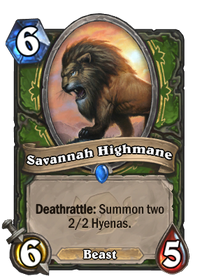 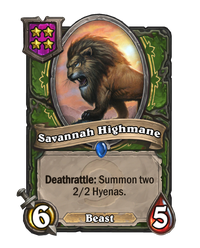 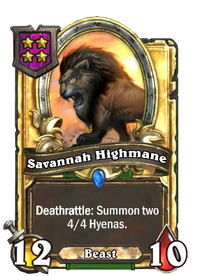 Savannah Highmane can be obtained through Classic card packs, or through crafting.

Savannah Highmane (Core) is uncraftable and cannot be crafted or disenchanted. 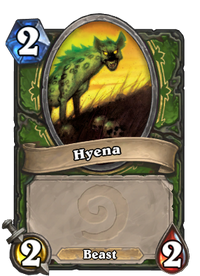 This card is a very effective card for almost any hunter deck, providing ample defense and great potential offense. Even in decks not focusing on Beast synergy, its Deathrattle makes it a very strong and "sticky" minion, providing a total of three minions - a 6/5 and two 2/2s - for only 6 mana. In comparison, the legendary Cairne Bloodhoof for the same cost provides only a 4/5 (2 less Attack) and summons a 4/5 (as opposed to two 2/2s) upon its death, and has no type synergy.

Savannah Highmane is commonly considered a staple card in hunter decks focused around the late or even mid game, serving both as a powerful play for board control and a substantial threat in its own right. However, its fairly high cost and Deathrattle make it less desirable in aggro decks, which prefer to focus on cheaper and more immediate sources of damage.

Savannah Highmane is a strong card for Beast synergy, with both the Highmane itself and the Hyenas summoned by its Deathrattle being Beasts. In particular, the summoning of the Hyenas will proc Starving Buzzard for extra card draw, and they will be granted Charge by Tundra Rhino. As 2/2s the Hyenas also make decent targets for Houndmaster, becoming 4/4 Taunts.

Savannah Highmane is a tough card to deal with, best countered by a Silence or transform effect, thus negating its Deathrattle.