Edit
watch 02:52
Roblox: DeepWoken - The Loop
Do you like this video?
Play Sound
Satyr Overseer
Regular 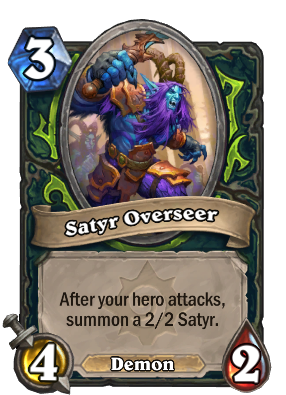 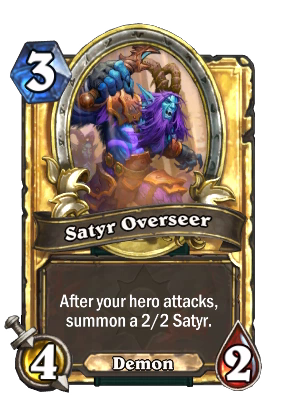 After your hero attacks, summon a 2/2 Satyr.
Flavor text

What he lacks in communication skills, he makes up for with highly responsive staffing allocations.

Satyr Overseer is a demon hunter minion card, inducted into the Legacy set, formerly from the Basic set.

Two copies of regular and golden Satyr Overseer are automatically given after the player completes the Ranked's New player experience system, unlocking Wild and Classic format. 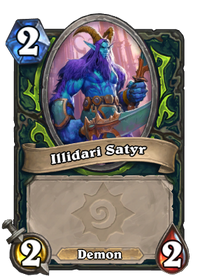 This card is a very effective way of generating 2/2s. With Demon Claws costing only one mana, this card can be used to generate a 2/2 every turn while also allowing the hero to attack.

If used with a Weapon, Satyr Overseer generates a free 2/2 every turn you attack.

Due to the low health of the Satyr Overseer, it is recommended to save one mana to attack the same turn its played, or else the opponent could remove it with a cheap spell or minion. The Illidari Satyrs also have two health, so beware if the opponent has Immolation Aura, Holy Nova, Blizzard, Chaos Nova or even Eye Beam that can remove the Satyr Overseer and/or all of the Illidari Satyrs.

Satyrs are a group of demons, mostly composed of former night elves. While most are loyal to the Burning Legion or Old Gods, a small sect are members of the Illidari.