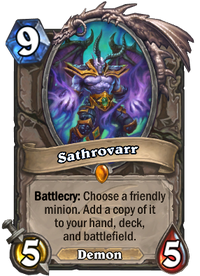 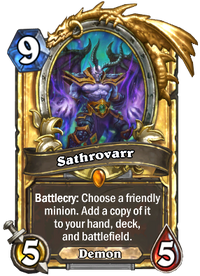 Battlecry: Choose a friendly minion. Add a copy of it to your hand, deck and battlefield.
Flavor text

Just wait until you also find a copy in your pocket. And your desk! And your FRIDGE!!

Sathrovarr is a legendary neutral minion card, from the Descent of Dragons set.

Regular Sathrovarr is obtained by owning a Descent of Dragons pack and going to Open Packs menu.

Sathrovarr is a huge value play, but getting that value is difficult due to his low stats and prohibitively high cost, made more difficult by the fact you need a minion on the battlefield to gain copies of. It is best used on a large minion that can be played out for free, such as Shirvallah, the Tiger and Mulchmuncher.

Sathrovaar is effective in Aviana/Kun the Forgotten King combo decks to make two instant copies of anything.

Sathrovarr the Corruptor is a dreadlord and part of the first boss encounter of the Sunwell Plateau raid. He has possessed the blue dragon Kalecgos, who fights players at Apex Point, above the Parhelion Plaza. While doing battle with Kalecgos, players will be transported to the Inner Veil, a shadowy realm where Kalec battles Sathrovarr in his half-elf form in an attempt to stave off his own corruption. Sathrovarr was defeated and Kalec rescued by the adventurers sent by Shattered Sun Offensive.