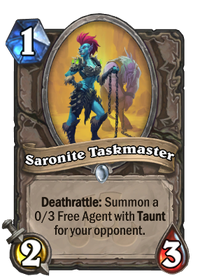 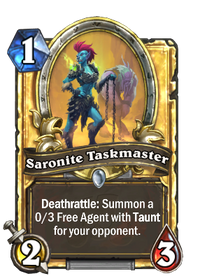 Deathrattle: Summon a 0/3 Free Agent with Taunt for your opponent.

Don't even think of asking for time off.

Saronite Taskmaster is a common neutral minion card, from the Rastakhan's Rumble set.

Saronite Taskmaster can be obtained through Rastakhan's Rumble card packs, or through crafting. 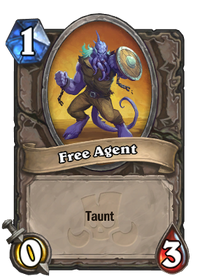 Like Zombie Chow, Saronite Taskmaster is an overstatted 1-drop with a negative Deathrattle. While it can effectively contest early enemy minions, the Free Agent summoned when it dies can get in the way later on and is a potential target for enemy buffs.

As a weak, 0-attack minion, the Free Agent can be used to easily trigger Overkill effects.

Alternatively, the 0-attack minion can be used to fill up a board space. If Silenced, the Free Agent effectively just fills up space on the opponent's side of the board. If this is successfully pulled off 7 times, the opponent's board is left completely dead outside of buffs.

Saronite is a metal found in Northrend. It is the blood of Yogg-Saron. According to Daggle Bombstrider, it's a very popular item on the black market.

The major user of saronite is the Scourge, who utilizes this evil metal to its full potential. They have used this metal to power their war machine and construct their master's stronghold, Icecrown Citadel, as well as the ramparts, spires and cathedrals that practically cover the Icecrown region. The Scourge, in the laboratories of the Fleshwerks, have also begun implanting broken shards of saronite into the bodies of ghouls, resulting in much deadlier minions in the Scourge legions. The Lich King has even commissioned the construction of a necropolis, Malykriss, which would be made completely of saronite.

Based on the name, this minion appears to represent a Scourge taskmaster overseeing the efforts of the captured Alliance and Horde soldiers who are forced to mine saronite in Icecrown's Saronite Mines.