This article is using {{Card template}}.
See Help:Style guide/Card for how to edit this kind of article.
Edit this article
Saronite Chain Gang
42395 • ICC_466
Regular 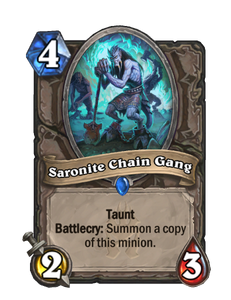 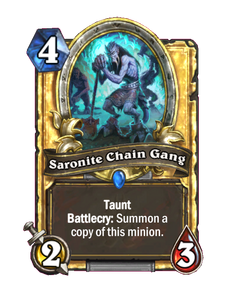 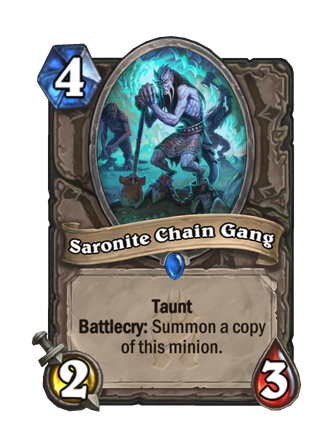 Saronite Chain Gang is a rare neutral minion card, from the Knights of the Frozen Throne set.

This minion is a 4/6 Taunt split between two minions, which has its advantage of having its health spread over two hits and having an extra body on board, at the cost of increased vulnerability against AoE.

Its Taunt characteristic also gives it great synergy with

Doppelgangster, this minion and the copy it summons make it a great fit for

Saronite is a metal found in Northrend. It is the blood of Yogg-Saron. According to Daggle Bombstrider, it's a very popular item on the black market.

The major user of saronite is the Scourge, who utilizes this evil metal to its full potential. They have used this metal to power their war machine and construct their master's stronghold, Icecrown Citadel, as well as the ramparts, spires and cathedrals that practically cover the Icecrown region. The Scourge, in the laboratories of the Fleshwerks, have also begun implanting broken shards of saronite into the bodies of ghouls, resulting in much deadlier minions in the Scourge legions.

The Lich King has even commissioned the construction of a necropolis, Malykriss, which would be made completely of saronite.

This minion appears to represent the Alliance and Horde soldiers that have been captured and enslaved by the Scourge and forced to constantly mine Yogg-Saron's blood in Icecrown's Saronite Mines, a practice that subjects them to the Old God's unrelenting, maddening whispers and drives them insane.