This article is using {{Card template}}.
See Help:Style guide/Card for how to edit this kind of article.
Edit this article
Sanguine Reveler
45321 • ICC_903
Regular 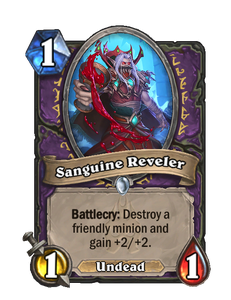 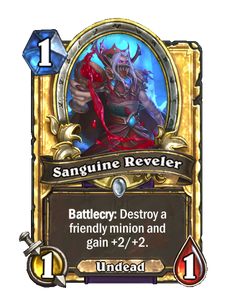 Have some! This drink is to die for! 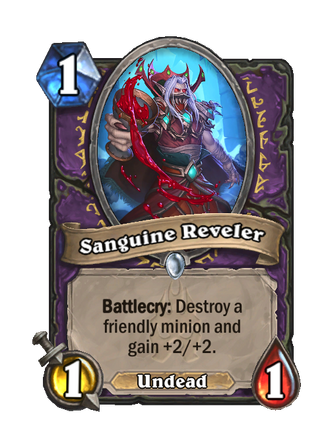 Sanguine Reveler is a common warlock minion card, from the Knights of the Frozen Throne set.

Sanguine Reveler can be a cost-efficient card, providing very powerful stats for just 1 Mana if you are able to satisfy it's Battlecry effect. However, in most situation, it is not worth sacrificing another minion for the +2/+2 buff, however it can be useful if you can pair it with Deathrattle minions such as

Devilsaur Egg, creating two strong minions for 1 Mana. This card can be considered for a Zoolock deck, however, it can often be a liability unless you have very specific minions in play.

Sanguine Reveler can be a very poor card in Arena, as you generally want to develop a strong curve of minions, and this card's effect will often cause you to kill one of these minions if you wish to play it, as it's rare you will draft minions that pair well with its effect.

The San'layn are a faction of darkfallen, led by a host of vampiric blood elf princes who appear to hold influential positions within the Scourge, often acting as ambassadors, overlords, and servants in direct contact with

The Lich King. The San'layn were created after Arthas took the most powerful of Kael'thas' shattered forces into his service.