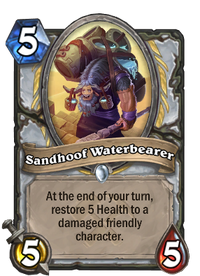 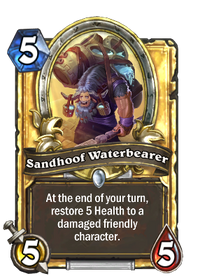 At the end of your turn, restore 5 Health to a damaged friendly character.

Used to carrying for his team.

Sandhoof Waterbearer is a common priest minion card, from the Saviors of Uldum set.

Sandhoof Waterbearer can be obtained through Saviors of Uldum card packs, or through crafting.

This minion is meant for the midgame, at the time which stronger minions will be available to be played. Its defining role is its ability to heal a random friendly character at the end of the turn, making it equivalent to a smaller Ragnaros, Lightlord. It is a more reliable healer than Lightwell due to activating its effect before the opponent even starts their turn, when in Lightwell's case they have a chance to destroy it before it can heal. This allows it to synergize with Reborn minions to give them extra health after Rebirthing, before the enemy starts their attack. However, Sandhoof Waterbearer's usefulness will make it a priority target, so protect it with Taunt minions, preferably those with high health so it will be able to heal them if they survive to the next turn.

Sandhoof Waterbearer is a good method of completing Activate the Obelisk, as it can heal at least thrice in order to complete the Quest.