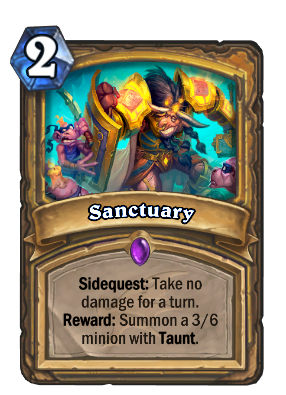 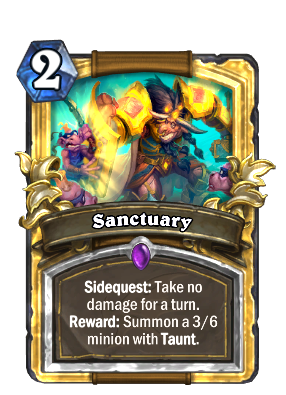 Sidequest: Take no damage for a turn. Reward: Summon a 3/6 minion with Taunt.
Flavor text

Few quests are completed by cowering under a table.

Sanctuary is an epic paladin spell card, from the Descent of Dragons set.

Sanctuary can be obtained through Descent of Dragons card packs, or through crafting. 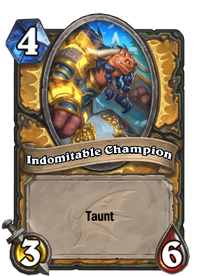 Generally, Sanctuary should be played into an empty board for the highest chance of completing the quest. Sanctuary is most effective in the early part of the game when your opponent doesn't have any minions on board that can immediately attack. Other times you can increase the likeliness of completion are following a board clear or while you have a sufficiently large Taunt already in play.

It can also be combined with Time Out! to guarantee its completion on the following turn, albeit sinking two cards and five mana into the 3/6 Taunt reward.

Your opponent will likely have not many low-cost options to remove the minion summoned by Sanctuary, allowing you plenty of time to prepare for the late game.

Sanctuary can also be used as a way to give your hero soft taunt, forcing your opponent to waste damage preventing your quest completion. This can be used to force your opponent to choose between killing valuable minions like Brazen Zealot and Sky Claw or stopping you from summoning a 0 mana 3/6.

You can intentionally use a Sanctuary to trigger Eye for an Eye, maximizing its damage, since your opponnent will probably turn the cannons against you.