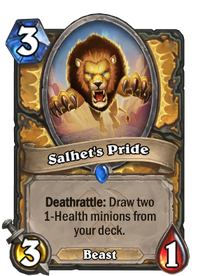 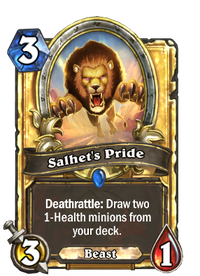 Pride cometh before the maul.

Salhet's Pride is a rare paladin minion card, from the Saviors of Uldum set.

Salhet's Pride can be obtained through Saviors of Uldum card packs, or through crafting.

Salhet's Pride provides extremely strong specialized draw on a decent body, when compared to cards such as Arcane Intellect and Sense Demons. However, 1-Health minions have been historically underwhelming, given the wide range of counters. This card is well-suited to an Aggro Paladin deck, threatening 3 damage to the opponent while promising the arrival of more minions after it dies.

Due to its guarantee to draw minions, Salhet's Pride works well with Hand Buff Paladin cards, ensuring that buffs land on even more minions.

Salhet's Pride represents one of the lion pets of the tol'vir soldier Salhet.

Salhet is a tol'vir and a soldier of the Sword of Ramkahen (the Ramkahen army).

Until the player arrives, he is considered the weakest link of the Sword of Ramkahen, and is often sent by High Commander Kamses to "special missions" (training his skills on killing hyenas). He is not a very good archer and also can't connect with his sword, missing most of his targets.

After his failure in killing the hyenas, he tells the player that ever since he was a cub he wanted to be a general and was eager to join the army, but as you've seen he lacks the coordination and skill a combat soldier needs. However, he is sent so often to kill hyenas that he befriended some lions and trained them to do his bidding. He reveals a gifted tactical mind as he commands his lions to effectively slay legions of hyenas.