Hearthstone Wiki
Register
Don't have an account?
Sign In
Advertisement
in: Pages with broken file links, All cards

This article is using {{Card template}}.
See Help:Style guide/Card for how to edit this kind of article.
Edit this article
Saidan the Scarlet
72810 • AV_345
Regular 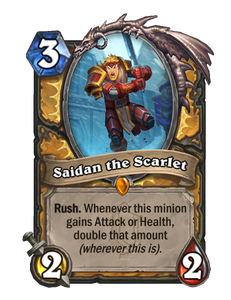 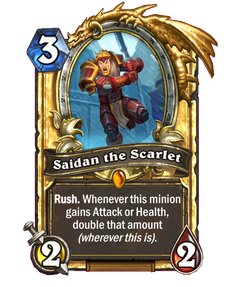 Click here for full resolution image
Elite
Rush. Whenever this minion gains Attack or Health, double that amount (wherever this is).
Flavor text

An orc mage accidentally kited him all the way from Stratholme.

Saidan the Scarlet is a legendary paladin minion card, from the Fractured in Alterac Valley set.

Saidan Dathrohan was one of the first five paladins of the Knights of the Silver Hand along with Uther the Lightbringer, Turalyon, Tirion Fordring, and Gavinrad the Dire. After the Third War, he subsequently formed the Scarlet Crusade, which he led as Grand Crusader. He was later killed by the dreadlord Balnazzar, who would possess his body in order to impersonate him and manipulate the Crusade from within.