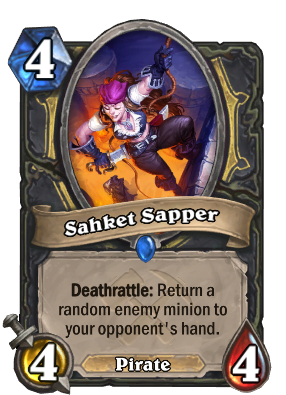 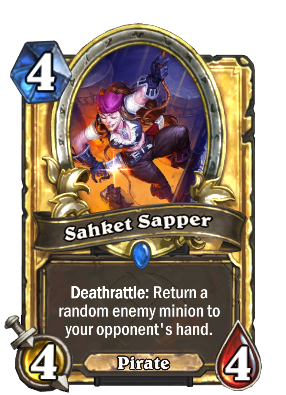 "Here, you dropped this."

Sahket Sapper is a rare rogue minion card, from the Saviors of Uldum set.

Sahket Sapper can be obtained through Saviors of Uldum card packs, or through crafting.

This minion's effect is a less controllable Sap. While Sap works as an immediate enemy tempo disruptor, Sahket Sapper's is a delayed effect on a Deathrattle, as well as being not being able to target it, making playing it risky, since it could target a minion with a strong Battlecry, not to mention the opponent could potentially exploit it to do so. Like Anub'ar Ambusher, its effect is highly dependent on the state of the board.

It's much more effective when given Rush, particularly from Captain Hooktusk. This way you could use its effect immediately while giving you time to destroy any minions you don't want to risk returning, allowing it to perform its job as a tempo disruptor more effectively.

It's also an effective card in Arena when you are ahead on board, as it forces the opponent to answer it with a removal spell or multiple minions to not have their tempo heavily disrupted from its Deathrattle.

The Sakhet Wastes is a large wasteland in northern Uldum stretching to the northern Pilgrim's Precipice, western Maker's Ascent, southwestern Obelisk of the Moon, southern Seal of the Sun King and eastern river (Vir'naal Oasis). The wastes are filled with Wastewander bandits, scorpids, and the bones of many dead creatures.

As a bandit from the Sahket Wastes, Sahket Sapper is possibly a member of the Wastewander.

The Wastewander (or Wastewander Bandits) are a band of outlaw nomads who wander the deserts of Tanaris and Uldum. They are led by Caliph Scorpidsting.

The Wastewander Bandits descend from a small band of human pirates who arrived in Kalimdor around year 20, shortly after its discovery by the people of the Eastern Kingdoms. When the Southsea Pirates arrived at Tanaris, they got into competition with the Wastewanders, fighting them and stealing the few ships their enemies had, resulting in the Southsea pirates marooning the Wastewanders in Tanaris.

Since their defeat against the Southsea Pirates, the Wastewanders took to a new life as bandits and started raiding rich goblin settlements and capturing their life-giving water wells. They have taken control over many of the water sources in the desert and were thus despised by the Gadgetzan Water Company. They could be found at the Noonshade Ruins and the Waterspring Field.

After the Cataclysm, all of them, along with their leader, moved into the Eastmoon Ruins. Numerous members of the organization were also spotted in the recently uncovered region of Uldum, having gained access when the region's shield was damaged and failed. This group is led by Warlord Ihsenn and are eager to pilfer the treasures of the titans. They can be found at the Sahket Wastes and the Ruins of Ahmtul, and have raided the Seal of the Sun King. Some became Schnottz's Landing Laborers, as evidenced by the Slacking Laborers.