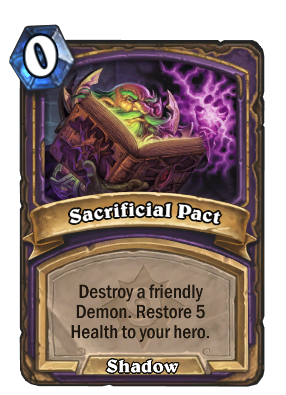 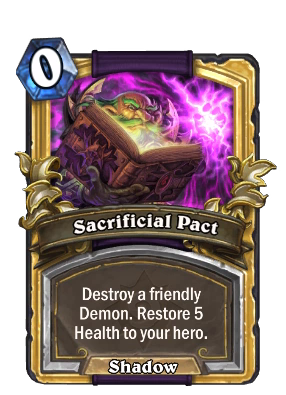 This is the reason that Demons never really become friends with Warlocks.

Sacrificial Pact is a warlock spell card, inducted into the Legacy set, formerly from the Basic set. 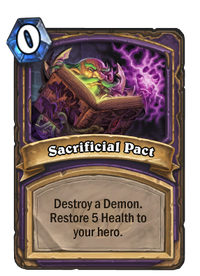 Two copies of regular and golden Sacrificial Pact are automatically given after the player completes the Ranked's New player experience system, unlocking Wild and Classic format.

Sacrificial Pact gives Warlocks healing, a valuable resource to Warlocks, for the price of a demon. Ideally, it should target a puny 1/1 imp or a dying minion, such as one affected by Nightmare or Power Overwhelming. Another excellent target is a deathrattle minion. Although healing is useful, unless you have convenient ways to generate small inconsequential demons to sacrifice, such as Imp Master or Dreadsteed or Galakrond, the Wretched, it's cumbersome to use and its lack of influence on the board makes it a poor card to include in most decks.

It is possible to use this offensively to destroy an enemy hero transformed into Lord Jaraxxus because he is a demon, but is complicated since he is not classified as a "friendly" demon, which is a requirement after Sacrificial Pact was patched.

This can be done through workarounds such as:

If the enemy isn't playing a warlock (doesn't have Jaraxus in their deck) it is possible to give them two copies via Expired Merchant and Treachery.

In World of Warcraft, Sacrificial Pact is a talented ability that allows warlocks to sacrifice a portion of their minion's health to create a temporary shield for themselves.

The unusual relationship between warlocks and their summoned demons is well-documented.

Warlocks command the obedience of mighty demons, summoning and dismissing them at will, using them as they see fit and sacrificing them the moment it serves the warlock's interests. Even the mighty infernals bow before the will of the warlock.