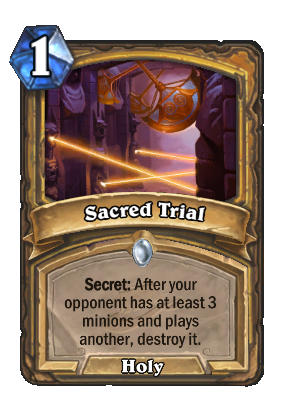 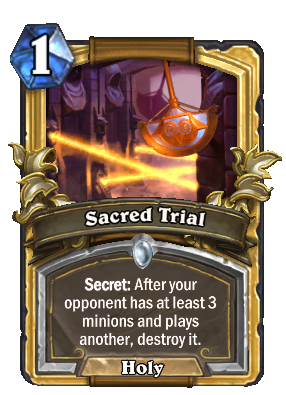 Secret: After your opponent has at least 3 minions and plays another, destroy it.
Flavor text

You have chosen poorly.

Sacred Trial is a paladin spell card, from the League of Explorers set.

Two copies of regular Sacred Trial are obtained by defeating Temple Escape, the third encounter in The League of Explorers's first wing, the Temple of Orsis.

As a Wild format card, both regular and golden versions of Sacred Trial can also be crafted for the following amounts:

Best used in a control deck as if you use a quicker deck your enemy will often trade their board to yours thus not giving ideal conditions for this card to trigger. Has synergy with Mysterious Challenger and Mad Scientist.

Sacred Trial represents "a hallway filled with holy lasers and swinging axes", which the worthy can stroll through unscathed, while the unworthy are destroyed.[11] It is original to Hearthstone.