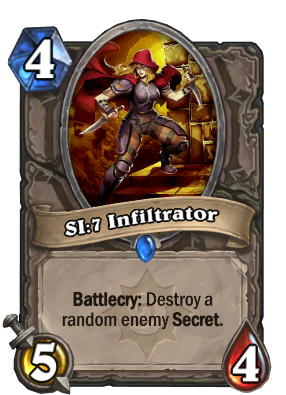 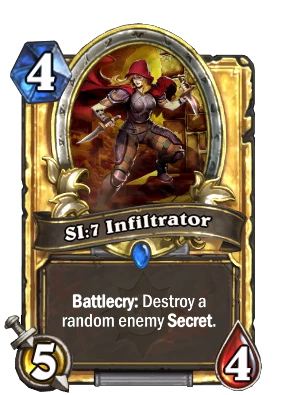 What will she destroy? It's a secret!

SI:7 Infiltrator is a rare neutral minion card, inducted into the Legacy set, formerly from the Classic set. 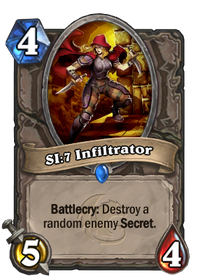 SI:7 Infiltrator can be obtained through crafting only.

Two copies of regular SI:7 Infiltrator (Core) are obtained for raising sum of all your class levels to 37.

Two copies of golden SI:7 Infiltrator (Core) are obtained for winning 1000 games across all classes.

SI:7 Infiltrator (Core) is uncraftable and cannot be crafted or disenchanted. 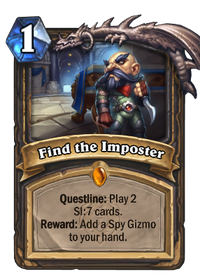 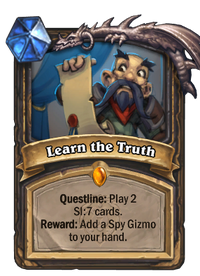 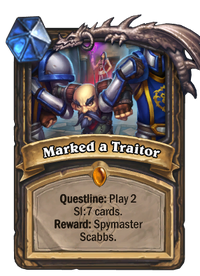 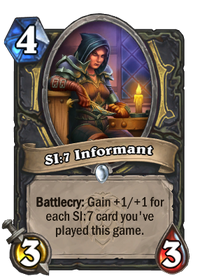 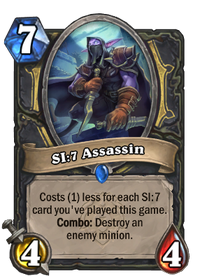 SI:7 Infiltrator is a tech card against Secrets, undoing the disruption and effect the destroyed Secret would've provided. It also has a good statline, making it useful even against decks that don't run Secrets.

When compared to other anti-Secret cards, while it only removes one Secret compared to Flare and Chief Inspector, doesn't hard counter multiple Secrets like Eater of Secrets or steal them like Kezan Mystic, it has the best cost-to-stats ratio among those cards.

SI:7 (Stormwind Intelligence), also spelled SI-7, is a secretive military force of Stormwind's sovereign monarch. It includes rogues specializing in special operations, espionage, assassination and stealth tactics. It is referred to as the Alliance's intelligence agency and Azeroth's most elite spy organization.

The organization is currently led by Master Mathias Shaw. SI:7 is located in the building with the same name in the Old Town quarter of Stormwind City. They have operatives all throughout the Eastern Kingdoms who carry out secret missions for Stormwind, such as Renzik "The Shiv" and Flint Shadowmore. They also have some operatives in the Kalimdor region, such as Andello Porter.

The name "SI:7 Infiltrator" has been used for various members of the agency, including agents in the Lost Isles and Zuldazar.