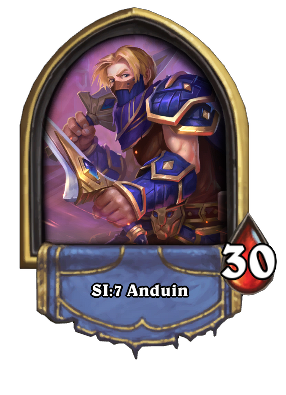 SI:7 Anduin is an alternate hero for the

SI:7 Anduin is unavailable to new players. It's unknown if he will become available again.

SI:7 Anduin could be purchased through SI:7 Anduin Bundle, which also contained 5 Priest packs and was available from February 2 to February 9, 2021.

Once unlocked and selected for use, SI:7 Anduin replaces Anduin Wrynn whenever playing with a Priest deck, as well as:

When viewed in the collection, SI:7 Anduin has the following flavor text:

If you're going to be a spy for a day, you could do no better than joining His Majesty's secret service. Obtained by purchasing the SI:7 Anduin Bundle.

Most of SI:7 Anduin's sounds are the same as Anduin Wrynn. Unique, different ones are noted as Unique in References section.