Edit
watch 02:53
GTA: The Criminal Enterprises - The Loop
Do you like this video?
Play Sound
Russell the Bard
Regular 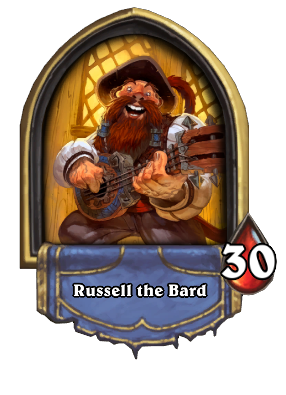 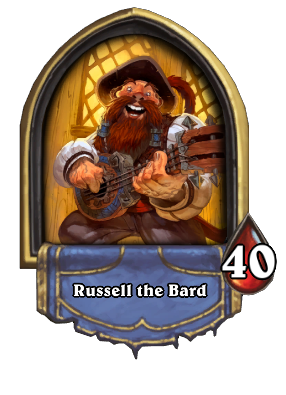 His tunes are catchy. Just ask your minions.
External links

Russell the Bard is a boss that can be encountered during the Dungeon Run.

His Hero Power makes it difficult to establish a board early on, and will be especially difficult if you don't have any big late-game minions in your deck. He also has a good set of early-game single-target removal to make this harder as well.

The best way to deal with him is to either last long enough to play your big minions or flood the board. His strongest minion is a Shado-Pan Rider, so he will have a difficult time taking out big minions, unless he has an Onyx Spellstone. Flooding the board works well because he lacks AoE removal and even if you let him steal a minion, he can only steal one at a time.

Russell the Bard
Stay a while, and listen!

Get over here!
Come here!
It's time to party!

Time for a duet!

Russell the Bard
Oh hey! Turn that thing down!

Russell the Bard
Thanks for your minions, friend!

Russell is a regular patron of the inn. He was the one who told the story of

Marin the Fox. He is also a bard.

The Bard was revealed as the second World of Warcraft hero class on April 1, 2008 — it was a Blizzard April Fools' Day hoax, and was never implemented as a real playable class.