This article is using {{Card template}}.
See Help:Style guide/Card for how to edit this kind of article.
Edit this article
Runic Egg
39433 • KAR_029
Regular 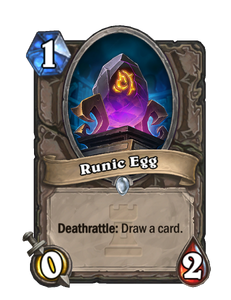 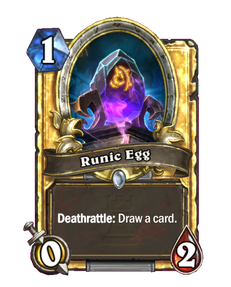 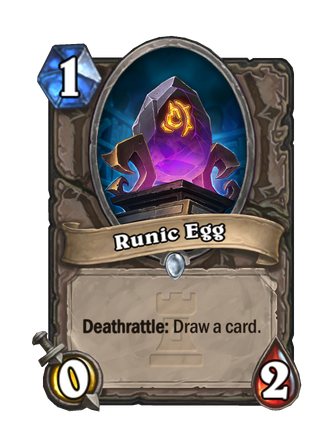 Runic Egg is a common neutral minion card, from the One Night in Karazhan set.

Runic Egg, for a 1-mana card, is near useless when played on its own, as the opponent will simply ignore it. However, granting it Taunt or +Attack through cards such as

Defender of Argus can allow it to be used to trade with enemy minions, triggering its Deathrattle. It also works well with

Ravaging Ghoul), and at times can serve as a deterrent to AoE board clears. However, its dependency on such effects and lack of stats and abilities mean Runic Egg is generally considered a very poor card.

This card has more use in a Grimy Goons-themed hand-buffing deck, particularly with Paladins. Combined with cards like

Grimestreet Outfitter, it turns into a sturdy one-drop with card draw, and as a 1-Mana minion, it can be drawn from

This card can be used with

Spiritsinger Umbra, and maybe even

Necromechanic. An alternate use is with cards that tinker with your Deathrattle minions, such as

Anka, the Buried, and

Shadowy Figure. Cheaper, one-time activators are another way to implement this - use things like