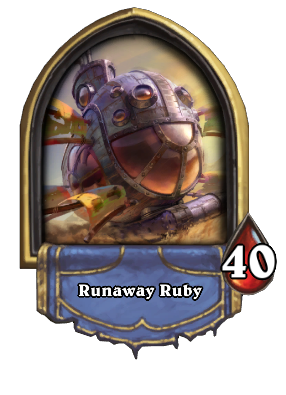 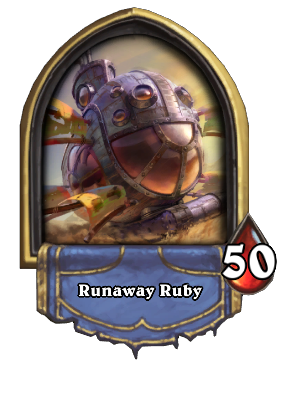 Gnomes put tank treads on a submarine for desert use. Because gnomes.

Runaway Ruby is a boss that can be encountered initially in Chapter 2 of Tombs of Terror. After completing Chapter 2, this boss encounter will be available in any completed chapter.

Reno Jackson
Someone should stop that ... submarine?
Sir Finley
Oh dear. I'd rather not end up a knight sandwich.
Elise Starseeker
We should probably get out of the way...
Brann Bronzebeard
Ah don't usually deal with heavy machinery, an' this is why!

Runaway Ruby
Didn't you hear me?! You gotta move!

It's coming through!
Move, move, move!
The brakes are out! Move!
This baby's gonna keep rollin'!

I hope insurance covers this...

Whew. Ya actually listened to me.

Runaway Ruby
Go to the desert they said, pilot a giant machine, it'll be fine!
Plagues running rampant. Mechs out of control. What a week.
This is the LAST time I pilot one of these.

Runaway Ruby
Don't touch the diver! Just get out of the way!

Runaway Ruby
Stop attacking the diver! This is our problem!

Runaway Ruby
If you won't move, we'll move you!

What're you going to do, wrestle the giant machine?!

Nice wrench! But it is not going to work on this!

Hey! You with the E.M.P.! You missed the diver!

Runaway Ruby
I TOLD you to move! Is this thing on?