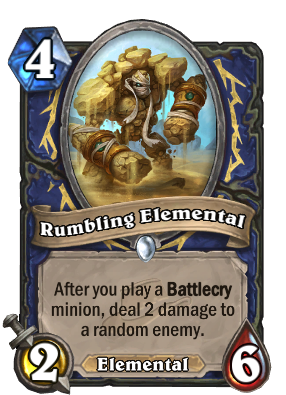 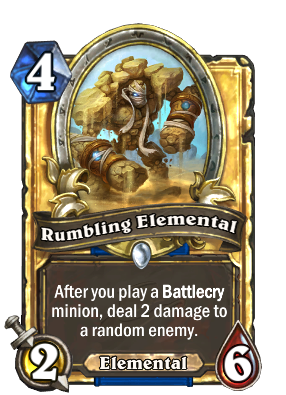 Uncollectible
After you play a Battlecry minion, deal 2 damage to a random enemy.
Flavor text

Rumbling Elemental is a common shaman minion card, from the League of Explorers set.

Two copies of regular Rumbling Elemental are obtained by defeating Temple Escape, the third encounter in The League of Explorers's first wing, the Temple of Orsis.

As a Wild format card, both regular and golden versions of Rumbling Elemental can also be crafted for the following amounts:

Shamans has plenty of cards with Battlecries, like Fire Elemental or Tuskarr Totemic, that can work well with this card. Rumbling Elemental can be a powerful component in a Battlecry deck, along with Brann Bronzebeard.