This article is using {{Card template}}.
See Help:Style guide/Card for how to edit this kind of article.
Edit this article
Rotface
42630 • ICC_405
Regular 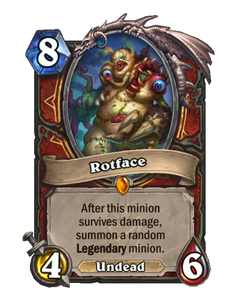 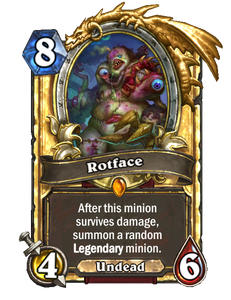 Daddy! I think I made a Legendary! 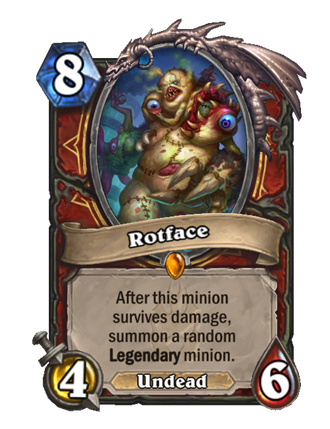 Rotface is a legendary warrior minion card, from the Knights of the Frozen Throne set.

Rotface is a soft taunt that forces the opponent to deal with it in two hits or fewer; as such, it's a great card to play in the late-game when both players are low on resources.

Legendary minions have a huge disparity in quality, with fantastic results (such as summoning a

Tyrantus), as well as a lot of very poor results (such as

Patches the Pirate or

Bloodmage Thalnos). For this reason, it pays off to maximize the amount of value you are getting from this card.

Utilizing self-damaging effects such as

Slam at Rotface can help generate extra value from the card's effect, going beyond what you could normally get from strictly trading with him. Equipping a

Blood Razor prior to summoning Rotface, decreasing its durability to 1, and then performing an attack with it after summoning Rotface is one easy way to trigger his effect risk-free. Having

Animated Berserker on the field prior to summoning him will also have this effect.

Scourgelord Garrosh also has excellent synergy with Rotface, as his Hero Power provides an efficient way to trigger Rotface's effect.

Buff cards such as

Rotface can be very powerful in Arena thanks to the difficulty of removing it in one go. If you're able to successfully bait out removal spells prior to playing him, he can easily win the game on his own.

If Rotface is killed in one hit, silenced, or the subject of a removal spell, then the 4/6 stats for 8 mana is a terrible deal, and can be a large setback.

Note that when Rotface takes damage from a minion with Poisonous, he will not summon a minion prior to dying.

A list of collectible Legendary minions in Standard and Wild can be found here.

Rotface is one of two flesh beasts created by

Festergut. Both of Putricide's creations are bosses in the Plagueworks wing of Icecrown Citadel that players need to destroy before they can challenge Putricide himself.