This article is using {{Card template}}.
See Help:Style guide/Card for how to edit this kind of article.
Edit this article
Rokara
63125 • BAR_847
Regular 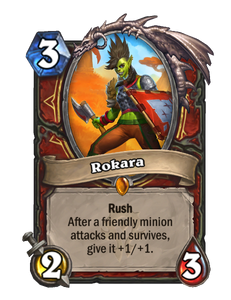 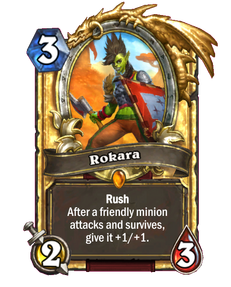 Click here for full resolution image
Elite
Rush
After a friendly minion attacks and survives, give it +1/+1.
Flavor text

"Tread carefully, but stand tall, and stand together. For strength and honor!" —Rokara

Rokara is a legendary warrior minion card, from the Forged in the Barrens set.

Rokara's buffing effect allows her considerable versatility regardless of when she's played. In the early game, she can trade into other weaker minions and buff herself, or allow other friendly minions to trade with opponents or attack directly and get buffed. In the late game, she can extend her buffs to even stronger minions and render them even harder to remove, especially if they've been already strengthened from the effects of Conditioning or Overlord Runthak. Make removing Rokara a top priority whenever she shows up or run the risk of her effect quickly snowballing.

Rokara is unique to Hearthstone. She is one of ten mercenaries introduced in Forged in the Barrens.

An aspiring hero in service to the Horde

Rokara came of age in Alterac Valley, a proud orc of the Frostwolf clan. She grew up on heroic tales of Thrall and Grommash Hellscream. Inspired by Grommash’s prowess, Rokara followed the warrior’s path as well, leaving her family to seek honor and glory as part of the Horde.

When she arrives in Durotar, the bustle of Orgrimmar fills Rokara with a sense of pride. She is promptly tested and assigned a teacher – the Darkspear shaman Bru'kan. The shaman’s methods are eccentric, but he is a wise and capable guide to Rokara’s first proving ground – the Barrens.

On her adventures, Rokara encounters Guff, a tauren druid, Tamsin, a Forsaken warlock, and Dawngrasp, a blood elf mage. They meet another troll in service to the Horde, a potion maker and collector of artifacts named Kazakus, who is singularly focused on gathering certain items of great value in the Barrens…[1]

Amongst the four children Elise was guiding ~1m21s into the reveal trailer of Journey to Un'Goro (they salute her at the end) three resembled adult mercenaries later seen in the Forged in the Barrens set: the orc resembles Rokara while slingshot-wielder resembles Varden Dawngrasp and the tauren resembles Guff Runetotem. After this was highlighted on Reddit,[2] Matt London initially replied to a "kids are all grown up?" question about this on Twitter stating it was non-coincidental, implying it was intended.,[3] but later the day in response to a reaction[4] stated he did not intend to confirm anything.[5]