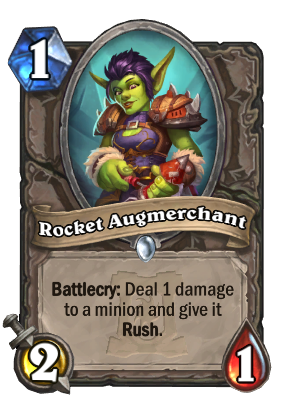 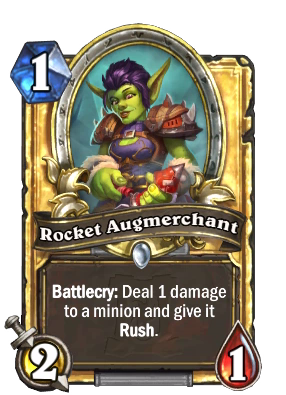 Battlecry: Deal 1 damage to a minion and give it Rush.
Flavor text

Rocket Augmerchant is a common neutral minion card, from the Ashes of Outland set.

Rocket Augmerchant can be obtained through Ashes of Outland card packs, through crafting, or as an Arena reward.

Like Guardian Augmerchant and Ethereal Augmerchant, this is a multi-purpose minion that can be used to either ping an enemy, or improve your ability to trade on the board. Unlike the other two cards, Rocket Augmerchant is a bit harder to make use of. It requires another minion in play which wants to immediately attack something, and doesn't need the 1 health to survive the attack. This situation happens, but it's too inconsistent to use this card for that reason.

On the positive side, Rocket Augmerchant has no negative effects if it's used to damage (but not kill) an enemy minion, since the Rush buff will already be over on your opponent's turn. This makes it the best at pinging, although the reduced utility still hurts the card overall.