This article is using {{Card template}}.
See Help:Style guide/Card for how to edit this kind of article.
Edit this article
River Crocolisk
1369 • CS2_120
Regular 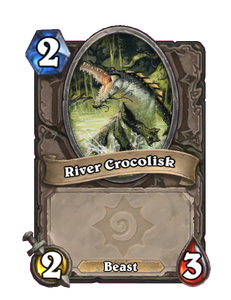 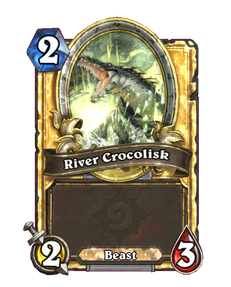 Edward "Lefty" Smith tried to make luggage out of a river crocolisk once. 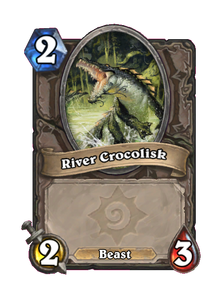 River Crocolisk is a neutral minion card, inducted into the Legacy set, formerly from the Basic set. 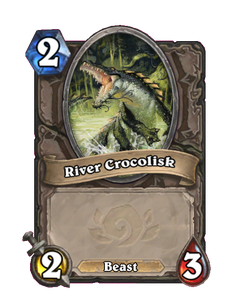 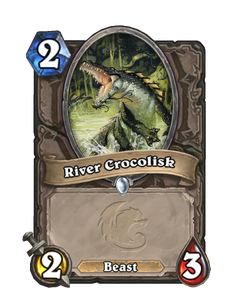 Regular and golden River Crocolisk are uncraftable and cannot be crafted or disenchanted.

Two copies of regular River Crocolisk are obtained for raising sum of all your class levels to 1.

Two copies of golden River Crocolisk (Core) are obtained for winning 500 games across all classes.

River Crocolisk (Core) is uncraftable and cannot be crafted or disenchanted.

This is a simple beast that can be enhanced by the numerous hunter cards that revolve around beasts. It is a slightly tankier version of Bloodfen Raptor. For other classes this is a fairly lacklustre minion and outclassed by Amani Berserker, Bloodsail Raider, and Plated Beetle.

A crocolisk is a long-snouted reptile with six short legs and a long tail that bears much resemblance to basilisks or the real-life crocodiles.

Crocolisks are powerful amphibious predators common in most regions of Azeroth, attacking unwary adventurers sailing their waterways. Crocolisks are usually found near bodies of water such as rivers, marshes and lakes. They exist naturally in both fresh and saltwater environments, preferring to remain close to land.