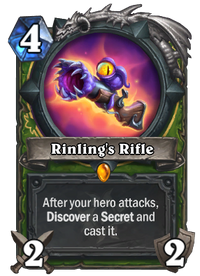 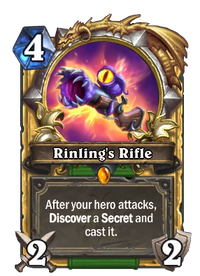 After your hero attacks, Discover a Secret and cast it.

This rifle needs a muzzle for its muzzle.

Rinling's Rifle is a legendary hunter weapon card, from the Madness at the Darkmoon Faire set.

Rinling's Rifle can be obtained through Madness at the Darkmoon Faire card packs, through crafting, or as an Arena reward.

A powerful and versatile weapon that can be included in a variety of Hunter decks. Although its stats are low, this is offset by the value of being able to discover Secrets that fit the situation, including several (Explosive Trap, Pack Tactics, or, in Wild, cards like Cat Trick) that can still deal damage. As these are generated, they can be tricky to play around, and picking some less commonly-run Secrets like Misdirection can prove surprisingly effective.

Like all weapons with attack-related effects, Rinling's Rifle benefits greatly from cards that buff Durability, such as Captain Greenskin.

Based on the card's name, it possibly belongs to Rinling.

Rinling is a level-55 quest giver found in Darkmoon Island. He runs the shooting gallery in the Darkmoon Faire.

Rinling has to keep a smile on your face, or he has to cut off his hand and eat no flesh until it regenerates. He also likes collecting engineering parts, to improve his tent. Judging from his skin tone, he is a Sand troll.

Once the Faire permanently moved to Darkmoon Island, Rinling finally had enough parts to open his shooting gallery, but he still has plenty of work to keep him busy. He not only collects more prizes to give out, but also uses his engineering skills to fix and refurbish the steam tonks.

However, the corruption on the rifle is unique to Hearthstone's Madness at the Darkmoon Faire theme.