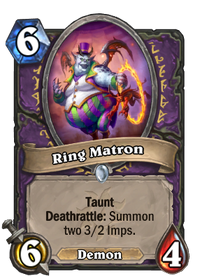 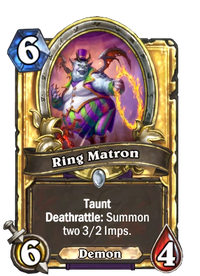 But where does she keep them?

Ring Matron is a common warlock minion card, from the Madness at the Darkmoon Faire set. 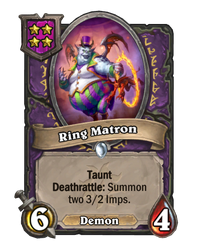 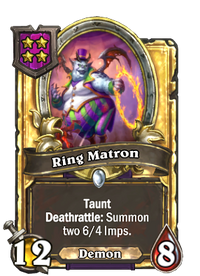 Ring Matron can be obtained through Madness at the Darkmoon Faire card packs, through crafting, or as an Arena reward. 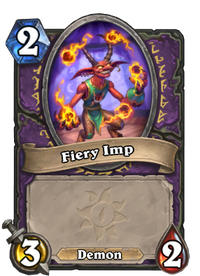 Despite its taunt, with only 4 health Ring Matron doesn't offer much defence. However, with its high attack, it is a solid threat. While its high mana cost makes it a sub-optimal choice for more aggressive decks, it can in Wild be summoned with Voidcaller, although Doomguard and Mal'Ganis are more typical choices for demon-based Zoolocks as they better fit the aggressive gameplan.

Ring Matron is an imp mother.

Imp mothers are a type of demon loyal to the Burning Legion. First seen during the third invasion of the Burning Legion, very little is currently known about them, but their stomachs are known to operate as a kind of portal from which imps emerge.