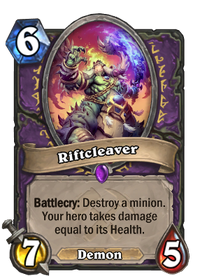 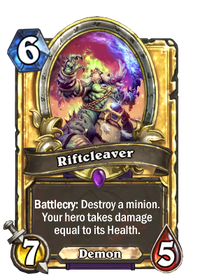 Battlecry: Destroy a minion. Your hero takes damage equal to its Health.

Brings you face to face with your destructive impulses.

Riftcleaver is an epic warlock minion card, from the Saviors of Uldum set.

Riftcleaver can be obtained through Saviors of Uldum card packs, or through crafting.

Riftcleaver provides hard removal on a well-statted body, but can inflict a large amount of self-damage. You can turn this into an upside with self-damage synergizing cards like Diseased Vulture and Nethersoul Buster. It can be used as a mid-game tempo pusher for more aggressive decks.

In Arena, this card fulfills a similar role to Bomb Squad, but much more effectively, thanks to its much better statline and its ability to remove bigger minions, even if the incurred damage is potentially higher and is immediate. On an even or advantaged state with decent amount of Health, one Riftcleaver can spell defeat for the opponent.

Riftcleaver is a pit lord.

The Pit Lords who serve under Mannoroth the Destructor are some of the most cruel, barbarous butchers to ever roam the trackless wastes of the Twisting Nether. These hulking engines of hate and death love only to kill and bring sorrow to all living creatures. Fanatically loyal to Mannoroth, the pit lords will stop at nothing to see the will of the Legion upheld. These massive demons take sadistic pleasure from instilling crazed terror, and then slaughtering their enemies.