"It is said that I hunt alone, wandering these bitter lands far from civilization. But in truth, I hunt with family. One that I hold close. I protect them, and they protect me. I am Rexxar, Champion of the Horde, and I never hunt alone."[1]
For other appearances of Rexxar, see Rexxar (disambiguation). 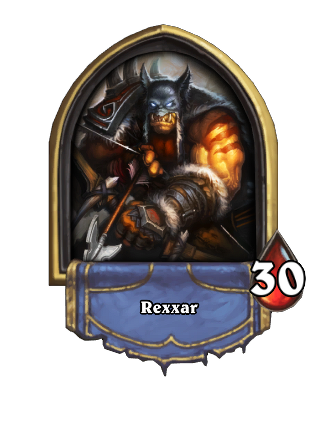 "I have watched the other races... I have seen their squabbling, their ruthlessness. Their wars do nothing but scar the land, and drive the wild things to extinction. No, they cannot be trusted. Only beasts are above deceit." - Rexxar

As a member of the half-orc, half-ogre Mok'Nathal Clan from the Outlands, Rexxar was instrumental in helping

Thrall conquer Durotar, the Azerothian homelands of the Orcs, where Orgrimmar would later be built. Rexxar is historically considered to be a Beastmaster, which is a warrior hero of the wilderness able to call upon creatures of the forest to serve him. Beastmasters were generally considered to be loners or mercenaries, though many of Horde race Beastmasters aligned themselves specifically with the Horde. Beastmasters were a Hero unit in Warcraft III that were able to have multiple summoned beasts (Bear, Hawk, and Quilbeast) at the same time, and had an Ultimate ability called "Stampede," which called down "hordes of rampaging thunder lizards to explode upon the Beastmaster's enemies." Rexxar was also a playable character in the Warcraft III: The Frozen Throne Bonus Campaign, The Founding of Durotar. During his time on Draenor and through the first and second wars, Rexxar was accompanied by a large black wolf named Haratha who was his loyal companion. Haratha was killed by an orc warlock while trying to save Rexxar. Rexxar killed the warlock but lost his beloved companion and declared a trust only for beasts from then on. During his travels in the wilderness, Rexxar befriended a bear named Misha with whom he wanders Azeroth to this day. Rexxar at one time held the prestigious title "Champion of the Horde" but upon leaving Azeroth to return to Outland is considered champion of the New Horde forces there. He now resides in Thunderhold Stronghold in the Blade's Edge Mountains of Outland, protecting the base from the beasts and monstrosities of Blade's Edge.

Outside of the lore surrounding him, Rexxar was an NPC whom in Vanilla WoW was part of a long yet paramount quest chain for the Horde to gain entrance to a raid dungeon, Onyxia's Lair. His pathing within this quest made it difficult to find him as it covered a very large area. He was also featured in a campaign in the Warcraft III expansion The Frozen Throne in which he fought Jaina's father in the name of the Horde and eventually killed him.

In the World of Warcraft pre-Cataclysm Elemental invasion event, Rexxar was one of the Horde Heroes who defended Orgrimmar, defending the Valley of Honor.

Although Rexxar is most known for

Misha, his bear, and Haratha, his wolf, he also has three other pets. These pets include:

Rexxar once called the Blade’s Edge Mountains home as one of the Mok’Nathal, a clan primarily composed of other half-ogres like himself. Unwelcome by both the full-blooded orcs and ogres in the area, the Mok’Nathal were secular and isolationist, wishing little else but to be left to their own devices. However, Rexxar saw great potential for his people in Azeroth, the world beyond the Dark Portal, and eventually left his isolated clan behind to join the Horde with his animal companion, Haratha the wolf. After being betrayed repeatedly by others of the orcish race, including

Gul'dan the Warlock, Rexxar lost Haratha to the dark magic of orcish warlocks and turned to a life of solitude, joined only by those incapable of lies and treachery: the beasts of the wild.

After roaming the lands of Azeroth, the great Beastmaster eventually became a great ally to

Thrall and the Horde, living within the walls of Orgrimmar and earning his place amongst the orcs and trolls. Rexxar’s accomplishments and key victories over Alliance forces won him the title “Champion of the Horde,” and he went on to lead their forces against those of Daelin Proudmoore,

Jaina Proudmoore’s father and Grand Admiral of the Alliance naval fleet. Rexxar defeated Daelin in combat as the rest of the Horde viciously battled against the Kul Tiras navy, leaving Jaina to mourn her father’s death and to rebuild her small empire. Rexxar, Thrall, and the victorious Horde returned to Orgrimmar, their battle won.

This cunning half-orc, half-ogre beastmaster is never without his longbow or the trusted animal companions he’s befriended on his journeys:

Huffer the boar, and

Leokk the wyvern. In Hearthstone, you can summon each of Rexxar’s furry and feathered friends to your aid using the

A proficient Hunter knows the wild like the back of his hand, so Rexxar’s unrivaled skill at

Tracking will help you plan your next move by allowing you to know exactly what’s coming up in your deck. Lying in wait, Rexxar is able to pinpoint the best moment to take aim and fire at his foes with his savage longbow, Sniping from the undergrowth. It’s these Hunter skills that helped Rexxar prove himself against the ogre warlord Kor’gall, swaying the Stonemaul clan to the side of the Horde. You can use these same skills in Hearthstone to ambush your opponent when they least expect it![2] 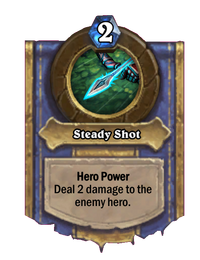 When viewed in the Collection, Rexxar has the following flavor text:

He only feels at home in the wilderness with his beasts. Super secret: Misha is his favorite.