) and leveling up. Rewards Track resets every time a new expansion is released.

Rewards Track was added in the Madness at the Darkmoon Faire patch, along with new items associated to Rewards Track, XP Boost and Tavern Pass. To allow the player to earn XP, The Quest system is also revamped at the same patch, which makes the new Daily quests award XP instead of gold, and adds the Weekly quests.

Rewards Track can be viewed by clicking on Journal icon (

) is an essential resources for leveling up in Rewards Track. Each level requires a pre-determined amount of XP to be reached. 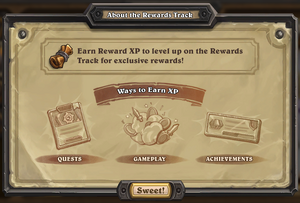 There are a total of 3 ways to earn XP:

XP Boost is an item that increases the amount of XP from any reward sources, even the achievements.

XP Boost can be only obtained by purchasing Tavern Pass. XP Boost can also be increased by leveling up Rewards Track.

XP Boost starts at the increment percentage of 10%. After reaching certain levels, the percentage is increased by 5%, making the maximum percentage of XP Boost being 20%. 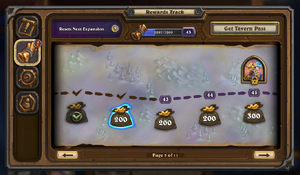 Free Track is located below the dashed line. It is available for free to all players.

Free Track is the only part which rewards the core in-game currencies of Hearthstone: gold, packs, cards and Tavern Tickets. Some levels of Free Track can also reward the player comestic items (a card back or a Hero skin of choice of 10).

Paid Track is located above the dashed line. It is not available to players and can only be unlocked by purchasing the Tavern Pass, which costs real money.

Paid Track only rewards comestic items, such as Alternate hero(es), card backs and comsetic coins. Paid Track can also reward the player an XP Boost to help the player level up faster.

Since both Free and Paid Tracks use the same level progress, if the player is in the middle of a certain level, after purchasing Tavern Pass, the player will be able to claim all previous levels' Paid Track rewards immediately.

Below is the table that gives the detailed data of Forged in the Barrens's Rewards Track.

The player ultimately gets these Free Track rewards after reaching level 100:

If the player has bought Tavern Pass and reached level 100, they also get these Paid Track rewards:

At some point, certain levels' rewards may be replaced with a better one. If the player reaches any of these levels before they are changed, Blizzard Entertainment will compensate them retroactively.[3]

For a detailed history of changes, see Patch changes section.

This section includes speculation, observations or opinions possibly supported by data or by in-game experience. It should not be taken as representing official statement until Blizzard confirms it.