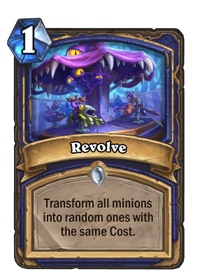 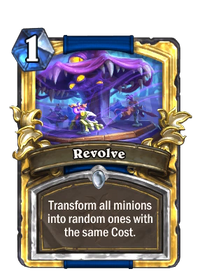 Transform all minions into random ones with the same Cost.

Revolve is a common shaman spell card, from the Madness at the Darkmoon Faire set.

Revolve can be obtained through Madness at the Darkmoon Faire card packs, through crafting, or as an Arena reward.

Revolve is a key enabler for Evolve Shaman in Standard. Its seemingly symmetrical effect can be used to transform weak Battlecry minions like Cagematch Custodian and Desert Hare into potentially much stronger minions, giving the Shaman easy access to huge board swings. Ideally it should be used when the opponent has no board, preventing the effect from backfiring. However, Revolve has extra utility, since it can remove Enchantments, bypass potentially taunt, and prevent minions from entering Resurrect Priest's dead pool.

In Wild, Revolve can be run as an alternative to Unstable Evolution or other Evolve cards. As a board disruption, it's much worse than Devolve or Devolving Missiles.

There is 1 achievement related to Revolve.