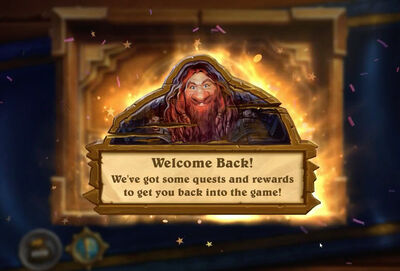 "I prepared three quests to get you going. Here's the first!" - The Innkeeper

The returning player experience comprises three special quests, each awarding the player with three Classic card packs. The quests are awarded one at a time, and cannot otherwise be completed.[3]

Next, the returning player is greeted with a special message from the innkeeper, welcoming them back to the game. The innkeeper then guides the player into the Return of the Hero challenge, the subject of the first quest. Set within an interface similar to that used for Class Challenges, the challenge comprises a series of three special matches between the player and the AI-controlled innkeeper. Each match has fixed heroes and decks for both the player and the AI.

The Return of the Hero challenge cannot be skipped and must be completed by players before they can return to the regular game. Once the player has defeated all three opponents, they are returned to the main menu, from where they are able to continue playing the game normally.

Upon arriving at the main menu, the player may be provided with a Standard format "Innkeeper's Deck" automatically assembled from the player's collection. This could have some connection to the relative number of Standard or Wild format decks the player already has saved.[5] The player is then given the first of two follow-up quests: "Ready for Action", requiring the player to play 30 cards in Play mode. Despite the description, it is also possible to complete this quest in Tavern Brawl mode.[6] Once completed, this quest is followed by "Back in the Game!", which requires the player to deal 100 damage to enemy heroes.

These quests appear to take the place of the regular daily quests until they are completed. The quests the player had before going inactive are removed, even if they can no longer be obtained afterwards (such as the Gadgetzan intro quests).

Returning players are a reason often cited for maintaining game consistency, specifically regarding changing cards or rotating sets out of Standard format. However, Ben Brode states "I don't think we've ever made a decision at the expense of current players exclusively because of returning players", adding "Part of the reason to keep them in mind is that it helps us find solutions that are good for everyone. ... We just take them into account."[8]