"Mechazod wants a rematch! This time new allies stand against him. Good luck with this return co-op brawl!"

Return of Mechazod! is a Tavern Brawl. It debuted on January 13, 2016. For exact times, see the schedule.

A direct follow-up to Unite Against Mechazod!, this Brawl uses almost exactly the same mechanics as its predecessor, but with new classes and decks for the players. 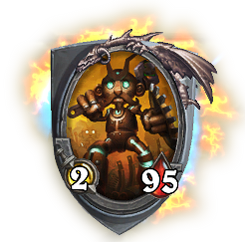 Return of Mechazod! is a cooperative Tavern Brawl. Two players, a Druid and a Mage, work together to defeat Gearmaster Mechazod, a special boss minion. Each turn, Mechazod will swap sides on the board and cast spells at the start of each turn to damage the players. If either player is defeated, both players will lose the match, making it important to do everything you can to keep the other player alive.

This is a surprisingly difficult Tavern Brawl. Players need to work together to survive the relentless onslaught of the tiny mechagnome, especially as his Attack continues to increase through Overclock, empowering Double Zap and Bomb Salvo. Make sure to keep both heroes alive, because if either dies, both players lose the battle. This may mean focusing all your healing effects on the other player.

Mechazod's behavior is very straightforward. He plays one of 5 spells at the start of each turn. The main synergy is Overclock with Double Zap/Bomb Salvo. Mechazod does Mad Bomber-style damage with Bomb Salvo, and uses Kill the Lorewalker if Lorewalker Cho appears. The main difference in Mechazod's behavior from this Brawl's predecessor, Unite Against Mechazod!, is that Mechazod now uses Prioritize to damage the highest-Attack minion on the battlefield, instead of Assassinate; the latter card no longer features in his deck.

The druid deck features a strong burst deck with Savage Roar using the many small minions that the druid's cards can generate, such as from Haunted Creeper, Violet Teacher, and Cenarius. Therefore as the druid, it is good to populate the board with small minions to play Savage Roar in a later turn.

The mage's deck features a strong Spell Damage theme with Arcane Blasts, Fireballs, and Pyroblast. The druid's Millhouse Manastorm can be used to reduce all the mage's spells to zero cost. 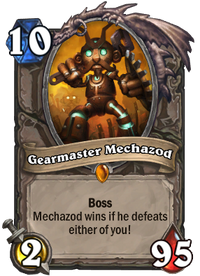 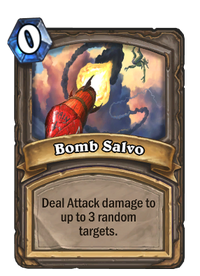 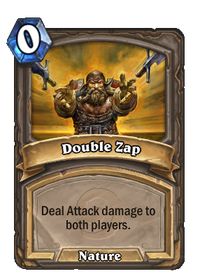 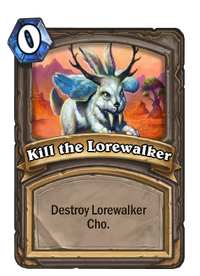 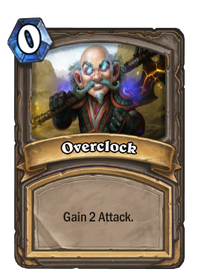 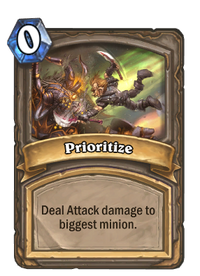 Opening remark
I will cleanse you both of the Curse of Flesh!

For Unite Against Mechazod!
Combine forces to defeat Gearmaster Mechazod. You’ll each be piloting a pre-built deck assembled to give both you and your partner on the other side of the board a chance to take out the technological terror. Each turn he’ll move from your side of the board to your friend’s, and you’ll need to play your cards just right to bring him down together. Watch out! If one of you is defeated, then you both are, so don’t be stingy with the heals.

Gearmaster Mechazod is ready for you! He’s got an arsenal of gnasty gnomish inventions and he’s going to use every tool at his greasy fingertips to wreck you and your partner.[9]

For Return of Mechazod that debuted on November 28, 2018