This article is using {{Card template}}.
See Help:Style guide/Card for how to edit this kind of article.
Edit this article
Resurrect
2298 • BRM_017
Regular 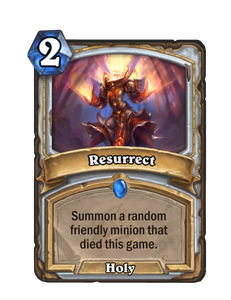 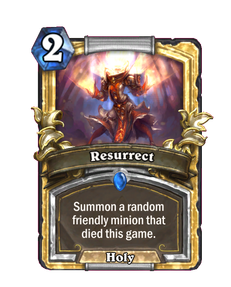 I walked into the dungeon and noticed a slain adventurer. In his final moments, he had scrawled out a message in the dust on the wall beside him. Two words: "rez plz" 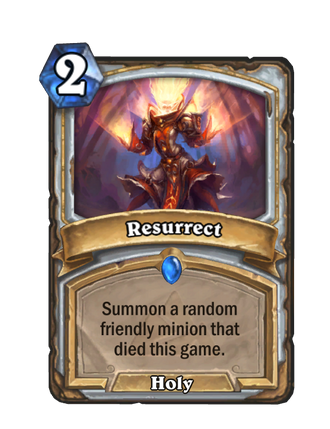 Resurrect is a rare priest spell card, from the Blackrock Mountain set.

Ideal in a deck that is heavy in spells with some high-cost minions. Resurrect has very strong synergy with

Using Resurrect with similar effects such as

Kel'Thuzad, N'Zoth may be useful since due to his ability, a minion that has died, revived, and died multiple times will have a higher chance of being resurrected. Resurrect is especially useful in Summoner Priest when used in conjunction with

Shadow Essence, being able to resurrect large minion as their full strength usually before the turn they can be played on.

Resurrect is based on Resurrection, a priest ability from World of Warcraft which allows the priest to resurrect a friendly player.