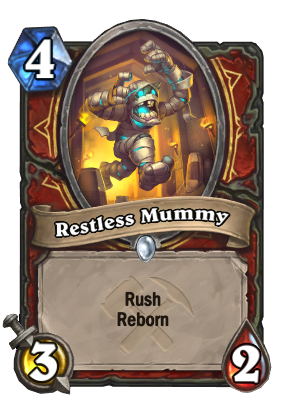 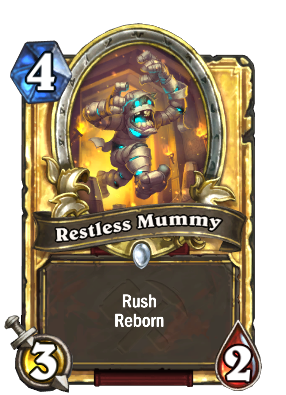 Restless Mummy is a common warrior minion card, from the Saviors of Uldum set.

Restless Mummy can be obtained through Saviors of Uldum card packs, or through crafting.

The Restless Mummy's stats of 3/2 with Rush is rather weak for a 4-Mana minion, worse compared to Rabid Worgen, but its real value comes in the form of Reborn. This minion is a good disposable for clearing the enemy board of two 3-Health minions or one 6-Health minion before leaving play.

Restless Mummy can also be played as a 3/2 in a secure board state. This is still a reasonable threat, since it still threatens the ability to trade twice but can attack the opponent.

Compared to Militia Commander, Restless Mummy provides more flexible damage and is more threatening when played on the board, but is less survivable and doesn't benefit from buffs (particularly Akali, the Rhino) as well.