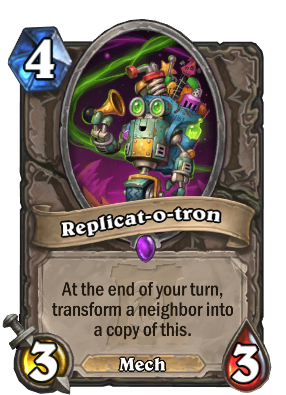 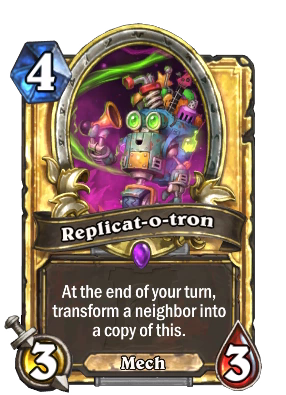 At the end of your turn, transform a neighbor into a copy of this.
Flavor text

According to the Boom Labs sales brochure, it "impractically makes itself!"

Replicat-o-tron is an epic neutral minion card, from the Ashes of Outland set.

This minion has subpar stats for its costs and a potentially negative effect. It's best used to transform small minions like Silver Hand Recruits or Imp tokens. However, its effect can be best exploited using buff cards. Since its effect creates a copy, Replicat-o-tron can transfer effects like Blessing of Kings, Libram of Wisdom, or Sand Breath to your other minions.

Keep in mind that this card's effect picks a random neighbor, which could make playing a larger minion on board with a Replicat-o-tron risky. If your opponent is able to remove anything between the Replicat-o-tron and your large minion, or the effect simply spreads too far, you can transform your minion into a copy of this.

In Wild, Replicat-o-tron's Mech tag is very useful for spreading Magnetic buffs, such as Zilliax and Wargear.

This minion appears to be an escaped mech from Boom Labs.