This article is using {{Card template}}.
See Help:Style guide/Card for how to edit this kind of article.
Edit this article
Repentance
232 • EX1_379
Regular 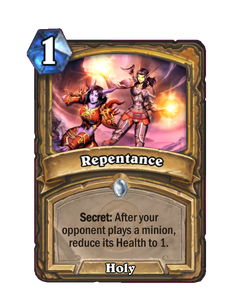 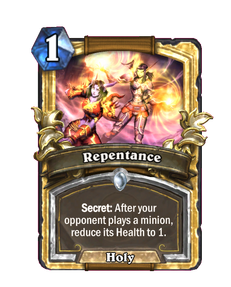 Repentance often comes in the moment before obliteration. Curious. 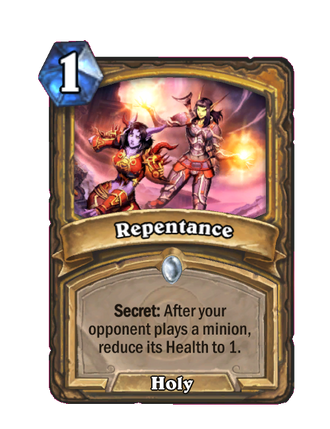 Repentance is a common paladin spell card, inducted into the Legacy set, formerly from the Classic set. 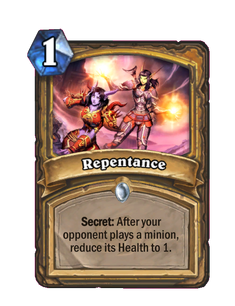 This Secret only triggers when the opponent plays a minion directly from their hand. Summoning minions by other means (such as

Animal Companion) will not trigger Repentance. Like all Secrets, Repentance takes effect after any Battlecry from the triggering minion, so e.g.

Ancient of War is going to have 1 Health, regardless of the option chosen.

This Secret used to work against an enemy who played

Lord Jaraxxus, setting the Health of their Hero to 1 after the Battlecry was resolved. However, this interaction was removed in Patch 9.2.0.21517, and Lord Jaraxxus will no longer trigger Repentance.

This Secret is especially useful against opponents with high drop decks (6+mana) or high Health minions, and is best used toward the mid-late game, to combat against people that would bring heavy hitting minions (i.e.

Core Hound etc.). This card is not as useful against those who play synergized creatures, those who have a lot of spawning tokens, or combo-based classes (rogue, paladin, shaman, warlock).

Repentance is a paladin ability from World of Warcraft that places the enemy target in a state of meditation, incapacitating them for up to 1 min (8 seconds against players). However, any damage taken by the target will awaken them. It is an extremely useful crowd control tool, allowing the paladin to temporarily put a secondary target out of play while they focus on another. It can also be used as an interrupt, or to buy the paladin time to self-heal.